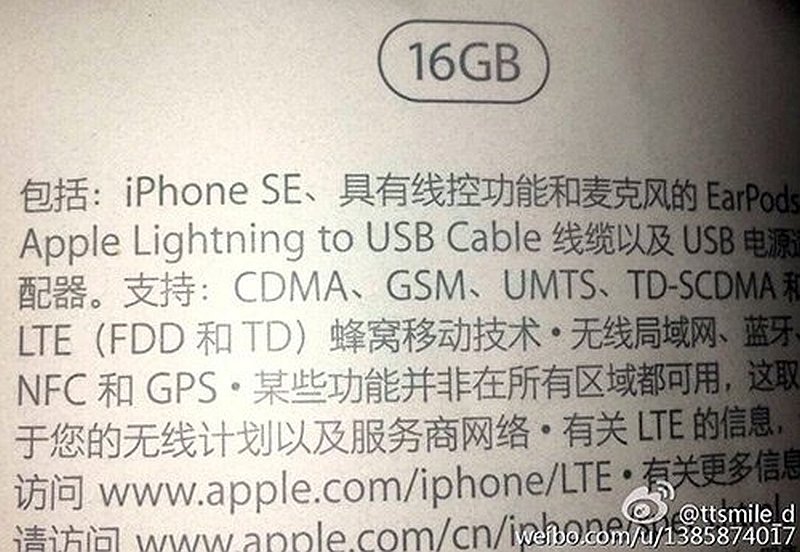 The alleged retail box of the upcoming Apple iPhone SE has been reportedly leaked ahead of its official launch next week. With the leak, it is confirmed that the name of the device will be indeed iPhone SE and not iPhone 5se, as reported previously. Few days ago, an alleged image claiming to be of Apple iPhone 7 Pro also surfaced online.

The box image, leaked by a Dutch website, also reveals that the device will be equipped with 16GB storage without 3.5mm headphone jack, which indicates the Cupertino-based company has fixed 16GB as the base variant of the new model.

It is also widely rumoured that a lightning connector will find the place instead of 3.5mm headphone jack since the leaked box clearly mentions – Apple lightning to USB cable, which points to that fact that the device will ship with the cable. Moreover, it is also clearly seen from the image that EarPods will be included with the device.

According to tech observers, the iPhone SE will be better than the previously released iPhone 5c, the base variant of which was shipped with 8GB internal storage.

Even though the leaked image does not specify the exact specifications, it is said that iPhone SE will be equipped with 1GB of RAM and Apple A9 processor to power its operations thus providing the form factor of an iPhone 5s in the new model.

On the connectivity front, as revealed by the leaked image, the iPhone SE will provide support for a wide range of networks such as GSM, UMTS, CDMA, TD-SCDMA, LTE (FDD and TD), along with GPS and NFC.

Although the leaked image is not from a credible source, you need to keep your fingers crossed till Apple releases the device officially next week.