Renowned Chinese smartphone brand Xiaomi is all set to unveil the Mi 5X in India on September 5. Ahead of its launch, there is another smartphone Xiaomi Mi A1 which was spotted on the popular smartphone benchmarking site GeekBench. The site gives the glimpse of the smartphone which indicates that it would be the company’s first smartphone to runs on Android One operating system. 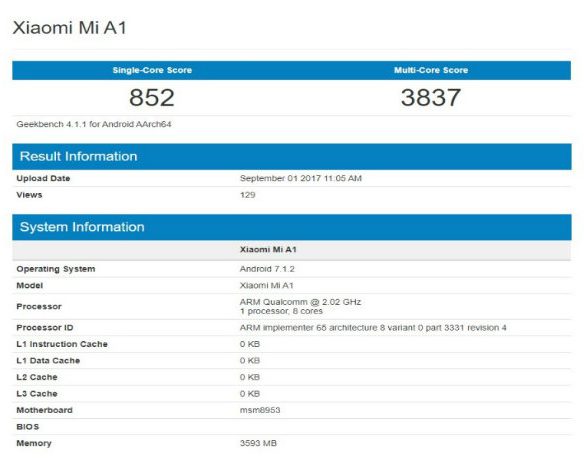 As per listing, the device obtained an 848 Single-core and 3837 Multi-core scores respectively. The score shows that it is quite a capable device which performs reasonably well in benchmarking. Moreover, the listing suggests that the Xiaomi Mi A1 will be powered by the Qualcomm Snapdragon 625 chipset clocked at 2.02 GHz and 4GB RAM. The phone runs on Android 7.1.2 operating system out of the box.

Before this leak, the handset was previously spotted on Indonesian certification agency, POSTEL which indicate that the smartphone will not run the MIUI skin. Moreover, the leak also states that the Xiaomi Mi A1 will come with dual SIM capabilities and sports a 5.5-inch FHD 1080p display. Furthermore, the Mi A1 smartphone was also spotted on Weibo, a Chinese networking website. The leaked images of the handset indicate that it will come with a 5.5 inches full-screen display.

Android One is an ambitious project of the Google which was started way back in the year 2013. And in the year 2014 Google successfully launched Android One to the handful of smartphones. Nonetheless, the main motive of Google was to offer the stock Android experience to the budget phones via Android One platform. As this OS comes with a unique feature and offers quick software update, We hope the see more smartphones are coming with it in future.