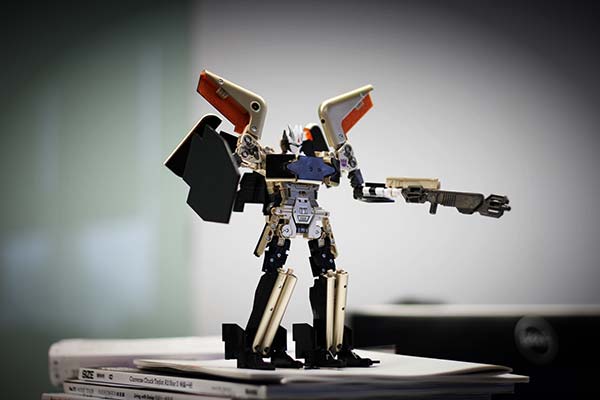 Xiaomi has established strategic partnership with Hasbro’s Transformers to crowdfund a robot toy model called Soundwave at CNY 169. The product will begin shipping in China starting May 13, with no information about the availability in other international markets.

With the same look and feel of Xiaomi Mi Pad 2, Soundwave turns into a Transformer-like robot that can be detached from the tablet’s assembly.

Developed to celebrate Xiaomi’s sixth birthday on April 6, the Transformers Special Edition Mi Pad 2 is a toy made by the company in partnership with Hasbro.

Commenting on the release, Hugo Barra in his Facebook and Twitter post revealed that the research and development team is working hard to ensure that the color, details, and feel are exactly the same as Mi Pad 2. It was a huge challenge to turn a 7mm tablet into a 3D robot, but the team managed to do so with a 30-step folding assembly, adds Barra.

Xiaomi & Hasbro teamed up to create Soundwave, a Mi Pad 2 Transformer that turns into a kickass robot in 30 steps. pic.twitter.com/vhcbrUHxgc

On the specifications front, Xiaomi Mi Pad 2 retains the same 7.9-inch IPS display as that of its previous counterpart. With a resolution of 2048 x 1536 pixels and density of 324 PPI, the original Mi Pad received rave reviews because of its impressive display.

A major twist in the Mi Pad 2 is the integration of a quad-core Intel Atom X5-Z8500 processor instead of Snapdragon, which is paired with 2GB RAM and 16GB of internal storage. According to unconfirmed sources, Mi Pad 2 will also be available in 64GB storage variant.

Talking about connectivity, the Xiaomi Mi Pad 2 offers support for Wi-Fi 802.11 a/b/g/n, ac draft, Bluetooth v4.1 including the latest Type-C 1.0 reversible connector but will not be having 4G support. Fuelled by a 6,190mAh battery, the upcoming Mi Pad 2 is capable of delivering 649 hours of standby time.