Home News Xiaomi to give competition to Samsung Galaxy Note 7 and iPhone 7... Xiaomi has already sent out media invites for an event scheduled on October 25, where it’ll likely announce the much anticipated Mi Note 2. While we have a fairly good idea of what it’ll get in terms of specs, a new alleged teaser of the device has appeared giving us an idea about its pricing.

The latest teaser suggests a whopping 5699 Yuan (approx Rs. 56,400) price point for the Xiaomi Mi Note 2. The pricing as per the latest teaser certainly comes across a bit surprising, as it’s highly unlikely that Xiaomi would launch the upcoming phablet at such a whopping price tag. Moreover, Xiaomi CEO Lei Jun also suggested earlier the company’s plans to keep the Mi Note 2’s price under $300 to attract customers. Hence, Xiaomi launching the device at such a premium price point seems rather far-fetched. 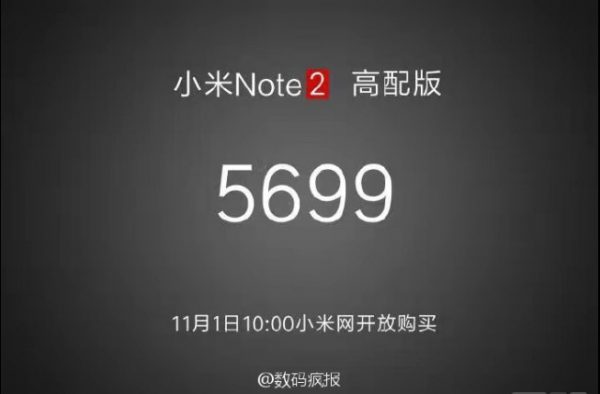 Thankfully, nothing is officially confirmed so we’ll rather wait for Mi Note 2’s official unveiling next week. That said, given the device’s impressive set of specs and top-of-the-line feature list — we may be in for a surprise. Apart from pricing, the new teaser also points to a November 1 release date for the Xiaomi Mi Note 2.

The Xiaomi Mi Note 2 is currently under mass production stage and will go on sale starting November 1, exactly one week after the device’s official unveiling on October 25. Besides, several reports also suggest a 5.7-inch variant of the device, that’ll get a dual-curved edge display similar to the one found on the ill-fated Samsung Galaxy Note 7. Though on the contrary, some reports suggest it’ll instead have very thin bezels. It is also possible that Xiaomi is planning both curved and non-curved offerings.

We’ll know the exact details of the upcoming Xiaomi Note 2 next week. We’ll keep track of any news surrounding Xiaomi Mi Note 2 and bring you the latest updates. Till then, stay tuned with PC Tablet for the latest updates in the world of technology.