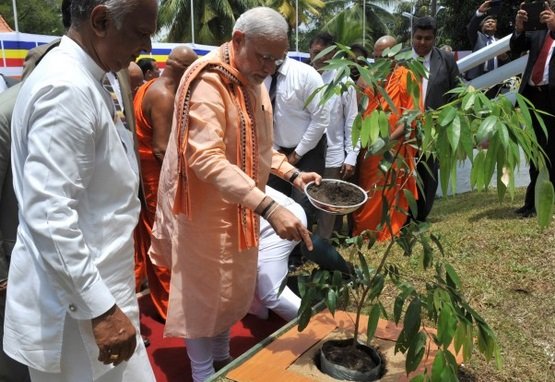 Honorable Prime Minister Narendra Modi will initiate a tree planting campaign on June 5, 2015 as a part of World Environment Day.

The Prime Minister will plant a sapling at his official residence in 7 race course to kick start this campaign.

Top sports stars in India will also join hands with Narendra Modi in this campaign.

In a recent press meet, Minister of State of Environment, Forest and Climate Change Prakash Javadekar told that Cricketer Virat Kohli and Wrestler Sushil Kumar will plant trees at a function in the Environment Ministry.

Sachin Tendulkar along with Anjinkya Rahane and Rohit Sharma will plant saplings on the evening of June 5 in Mumbai at Joggers Park on Carter Road.

They will be accompanied by Prakash Javadekar and Vinod Tawde.

Yousuf Pathan and Irfan Pathan will initiate this campaign in Vadodara. Narendra Hirwani, Sanjay Jagdale and Gopal Sharma along with Urban Administration, Housing and Environment Minister of Madhya Pradesh Kailash Vijayvargiya will plant saplings in Indore.

Mary Kom and Saritha Devi have announced their support for this campaign, and they will plant a sapling wherever they are on June 5, 2015.

As a part of World Environment Day, 70 acres of forest land in Pune is being compounded, and more than 4000 trees will be planted in it. This forest will run as a memorial garden, and public will have the chance to name every tree in the name of their deceased beloved one by paying 2000 INR.