Windows 10 S is a special version of Windows 10, designed especially for tablets, which works very similar to an original Windows 10 but with a number of limitations, such as, for example, that we can only run UWP applications. This operating system was launched on May 2, 2017, and since then, although the initiative was good, it has not really had the expected reception among users, which has forced Microsoft to change the way things are done.

Although initially Windows 10 S was designed to encourage users to use UWP applications , Microsoft launched a promotion through which all users who use this operating system could upgrade to Windows 10 Pro paying only $ 50, a reasonable price lower than a normal license costs, thus unlocking all the functions of the operating system, including the execution of Win32 applications .

Since the users finally ended up updating to the full version of the operating system, Microsoft has taken a decision on this version, and that instead of continuing to maintain this limited version, Microsoft will enable an ” S Mode ” in Windows 10 Spring Creators Update, Redstone 4, which will allow users to convert any version of Windows 10 to a limited version of UWP applications, blocking the execution of Win32 applications, processes, and services.

Now that Windows 10 S is going to stop being a version of the operative system and it is going to become an independent mode, all the users of this operative system are going to be able to update to a complete version of Windows without having to pay anything. The only drawback is that, instead of updating to the Pro version, as it was updated when buying the license for $ 50, users will receive the Home version of the operating system.

In addition, contrary to what has happened on other occasions, this update will not have a time limit, so we can expect whatever we want to update our license. What’s more, if we buy a computer that comes with this version after a while, we can update the license without problems. 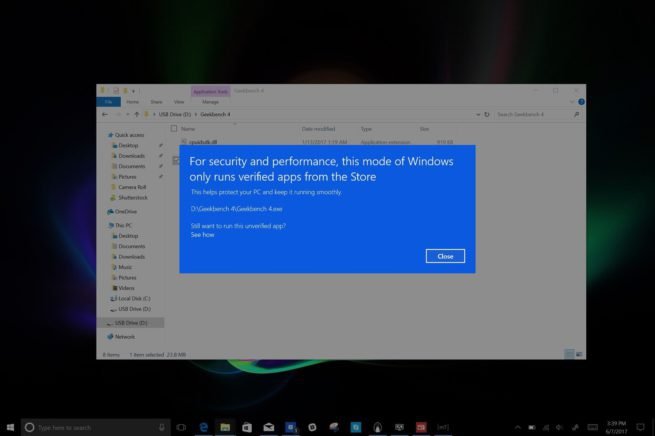 S mode will work the same as Windows 10 S

When users upgrade to Windows 10 Home Spring Creators Update they can manually activate, if they want, the new S Mode of the operating system.

This S mode blocks to the execution of Win32 applications, forcing users to download applications from the Microsoft Store and run only these UWP applications, improving the performance, battery life and security of portable equipment compared to those they use unrestricted versions of Windows 10 that, by force, consume more resources.

There is still no exact date to be able to upgrade the Windows 10 S licenses to the Home version of the operating system for free, although everything points to the arrival of Redstone 4, the new operating system update that we will see at the end of March 2018.