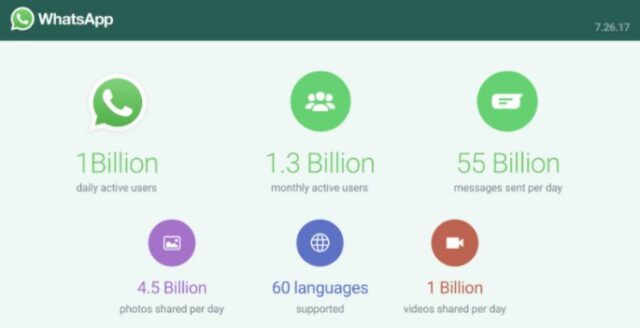 Facebook owned WhatsApp is currently enjoying the success of tremendous growth in their users base globally. The company has unveiled the statistics which display its user’s database volume increment in different categories. According to the WhatsApp, it has successfully acquired 1 billion daily active users on its service. The monthly active users base has been bumped up to 1.3 billion, and almost 55 billion messages are shared every day in 60 supported languages. Furthermore, 4.5 Billion photos shares per day and video sharing have been bumped up to 1 billion.

Nonetheless, Commenting on the announcement WhatsApp CEO Jan Koum said on the blog. “As we celebrate this milestone, we’re committed more than ever to bringing you more useful features to enjoy, while delivering the reliability, simplicity, and security you expect with WhatsApp.”