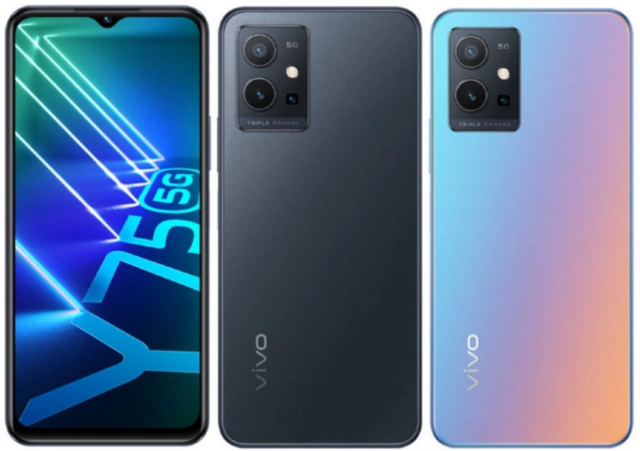 Rumour has it that Vivo is getting ready to launch its mid-range Vivo Y75 4G smartphone in India. Unconfirmed sources claim the Y75 4G phone could launch on May 22 itself. The Chinese company had earlier launched the Y75 5G phone in India powered by the Dimensity 700 SoC. Launched in January, the Y75 5G is priced at Rs. 21,990 and features an 8 GB RAM, 128 GB ROM, and a 5000 mAh battery.

Now, we know there is a Y75 4G model as well which should no doubt be positioned below its 5G compatriot and will have a matching price tag as well. According to information available at the moment, the upcoming Y75 4G is touted to come with a 6.44-inch FHD+ AMOLED display with a dew drop notch at the top for housing the selfie cam.

Under the hood, the phone features a MediaTek Helio G96 chipset paired with 8 GB of RAM and 128 GB of storage. There is also the option to add another 4 GB of RAM using the Virtual RAM feature. It is not known though if there is going to be a micro SD card slot, dedicated or otherwise to allow for the addition of more storage beyond the 128 GB already available.

Power likely would come from a 4,020 mAh battery backed by 44W fast charging. If true, this is going to be a huge downgrade from the 5,000 mAh battery that the Y75 5G smartphone comes with. Other aspects of the Y75 4G known at the moment include a depth of just 7.36 mm while tipping the scales at 172 grams.

As for optics, it is going to be a triple camera setup at the rear comprising of a 50 MP primary camera. Complementing the same is going to be an 8 MP secondary cam and a 2 MP auxiliary camera. The front gets a 44 MP camera for shooting selfies and video chats.

Coming to price, that’s still a closely guarded secret though given the tentative May 22 launch date for the Y75 4G means we have got some time for the tipsters to dig up the expected pricing in between. Stay tuned.