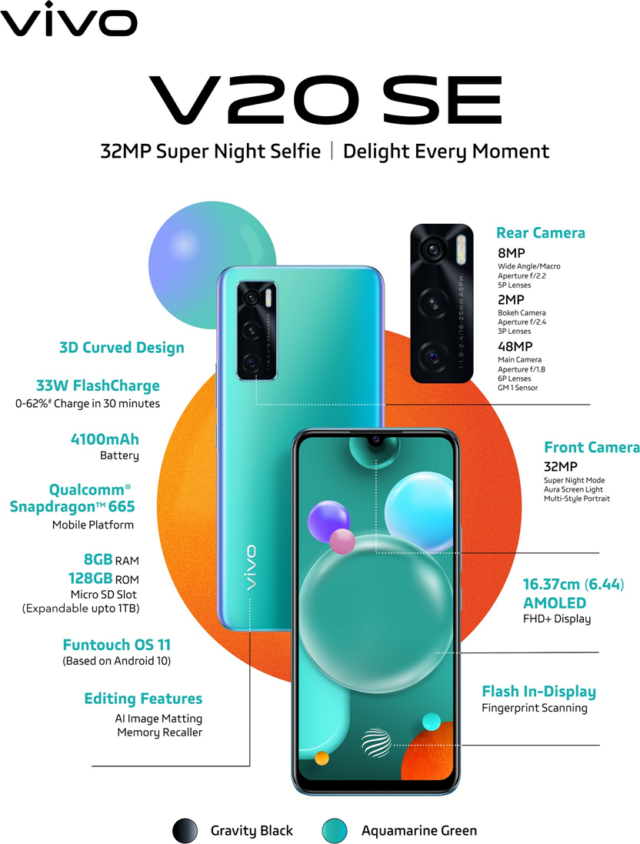 Vivo has launched its new V20 SE smartphone in India which comes across as a decently specced phone at an affordable price bracket. With this, the new V20 SE joins the V20 launched earlier. There also is the V20 Pro that is expected to be launched some time by the end of this month.

Coming back to the Vivo V20 SE, the phone comes with an interesting hardware mix. While on one hand, the phone features the Snapdragon 665 chipset which isn’t quite known for its speed, there is the 8 GB of RAM which can be more than enough for a phone in its segment. For storage, there is 128 GB of it at your disposal and can be further expanded to a max of 1 TB via microSD cards.

The front is dominated by 6.44-inch full HD+ AMOLED panel with a waterdrop notch for the selfie cam. A 4,100 mAh power source keeps the lights on and is backed by 33 W FlashCharge fast charging tech. Another highlight of the phone is its in-display fingerprint sensor and is among the more affordable device to be so equipped. The phone runs Funtouch OS 11 based on Android 10.

For optics, there is the triple lens rear camera arrangement with a 48 MP f/1.8 lens acting as the primary sensor. Complementing the same is an 8 MP f/2.2 ultra wide-angle lens and a 2 MP depth sensor with f/2.4 aperture. The front gets a 32 MP camera having f/2.0 aperture for selfie shots. The phone comes with several pre-set modes that apply to both the front and rear cameras. For instance, there is the Super Night Selfie, multi-style portrait and aura screen light.

Connectivity options with the new V20 SE include 4G LTE, Wi-Fi, GPS/ A-GPS, and Bluetooth 5.0. There is an FM radio as well while the Type-C charger allows for both data transfer and charging roles.

Coming to its price, the V20 SE is available in a single 8 GB + 128 GB trim level which will set you back Rs. 20,990. Color options you have with the phone include Aquamarine Green and Gravity Black. Sale starts November 2 onwards and is going to be available via all major India online store as well as e-commerce sites.