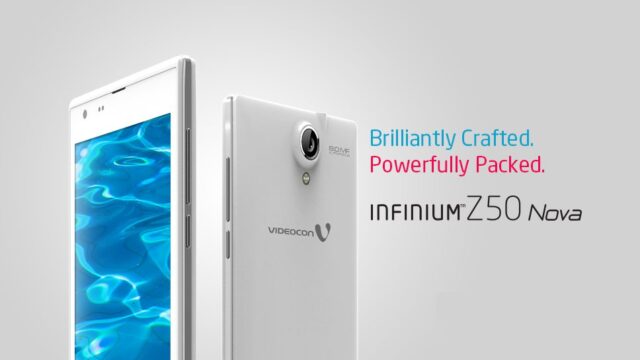 The craze to launch the smartphone has caught Videocon to unveil its Infinium Z50 Nova in India. The smartphone would have the operating software of Android 4.4 Kitkat and priced at Rs.5,999. The product is exclusively available through Flipkart.

Videocon’s Infinium Z50 Nova has a dual-SIM support, and runs on out-of-the-box Android. It features 5-inch qHD IPS display. The product would also have a processor of 1.3GHz quad-core coupled with 1GB of RAM.

The new launch of the smartphone would sport an 8-megapixel camera with autofocus and Sony Exmor R sensor apart from LED flash. On-board, it would have a two-megapixel front-facing camera. It provides resolution of 540×960 pixels. The company’s smartphone has built-in storage facility of 8GB. However, it can be expanded through microSD card of maximum of up to 32GB storage.

Videocon’s Infinium Z50 Nova has connectivity choices including Bluetooth 4.0, 3G, Wi-Fi, Micro-USB, and GPS/ A-GPS apart from FM Radio. The device would measure 145.4×72.4×8.2mm and comes up with 1900mAh battery. The smartphone device would be available with black and white color options.

The product would have Java support, and the software would support flash. The smartphone can be charged through Micro-USB.

Videocon mobile phones’ CEO, Jerold Pereira, said that currently consumers want to have a smartphone with advanced technology besides stunning design and maximum features. He said that the company’s brand was a consumer-centric one catering to the expectations of the consumers. It enabled them to bring out brilliant specs, as well as, stunning performance through a reasonable cost.

The CEO said that it was a great choice for the smart-generation and that Infinium Z50 Nova provides stylishness besides affordability offering a faster, smoother, and an unmatched smartphone experience to its consumers.

The latest launch comes on the heels of Videocon unveiling Infinium Z50 Quad in November. It was priced at Rs.7,349 and had double SIM of GSM. The Infinium Z50 Quad runs on Android 4.4.2 KitKat. Its features included a 5-inch qHD with 540×960 pixels and IPS display. The Quad model has a process of 1.3GHz quad-core coupled with 1GB of RAM.