Tecno Mobile lately unveiled a new entry-level budget smartphone dubbed as Tecno Spark Go in India. Priced at just Rs. 5,499, the phone offers a modern design profile, decent specifications and is available for purchase from the offline market. That being said, is it the right phone for you? Well, let’s check out the same in our full Tecno Spark Go review.

Before starting with the Tecno Spark Go review, let’s have a glance at the phone’s specifications, pricing and things we get with the device. 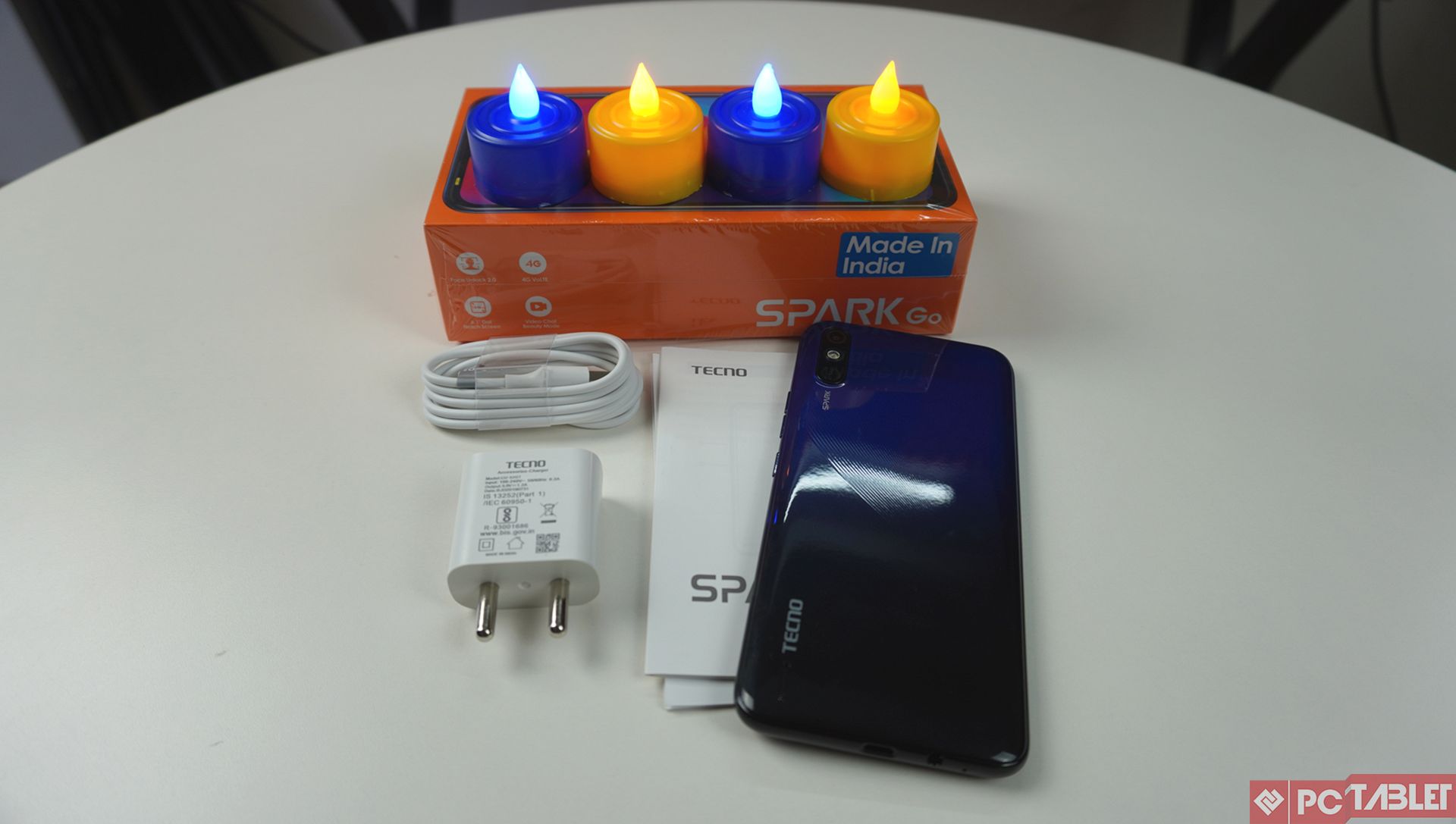 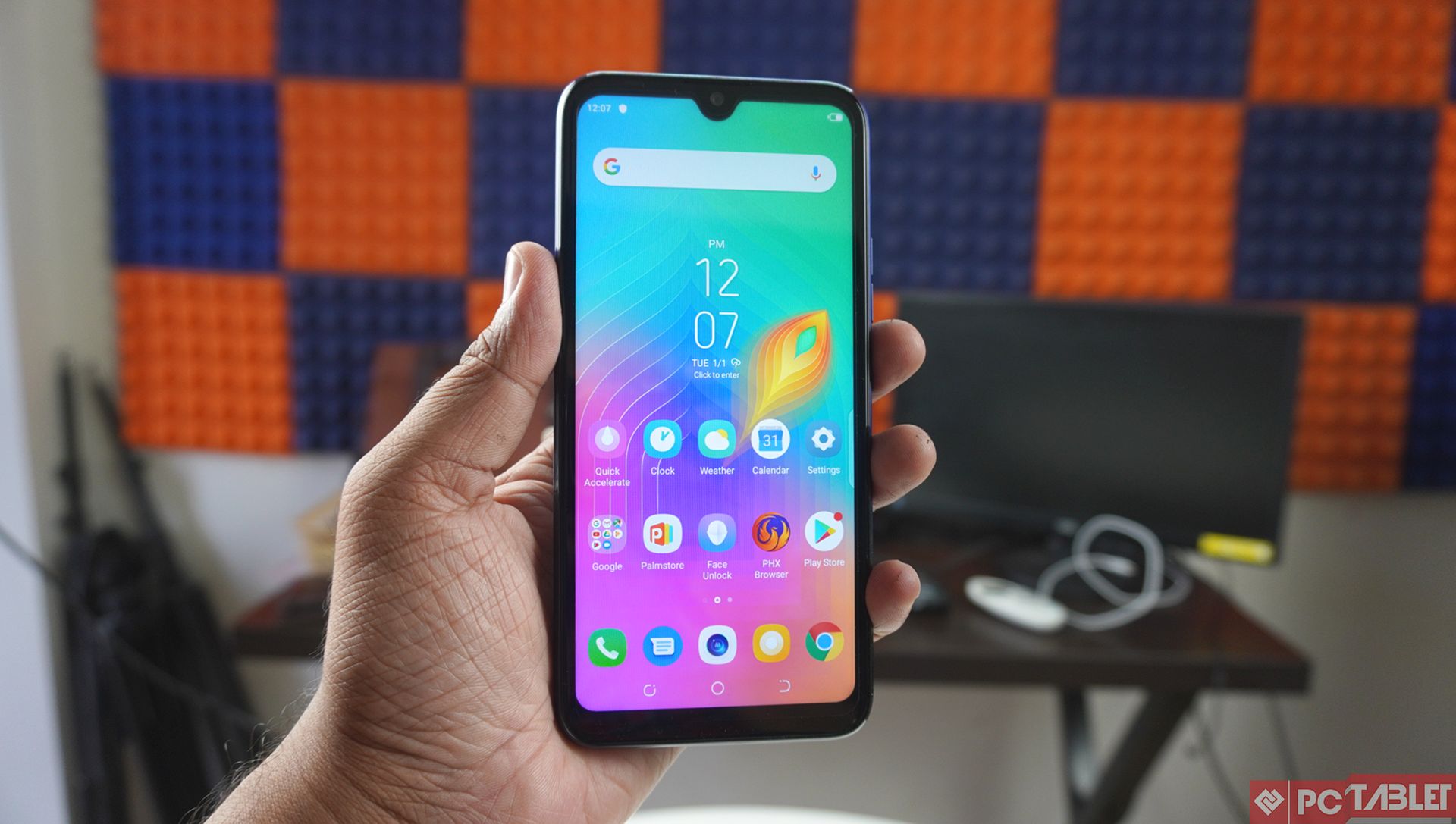 Design is indeed one of the major selling points of the Tecno Spark Go. For starters, it comes with a polycarbonate frame and back dressed with a shiny gradient finish on top. The Nebula Blue version we have here gets a shiny blue hue at the top that gradually merges into deep glossy black at the bottom. Besides, there’s also an option to choose for the Royal Purple variant that offers Black on top and Purple at the base.

Moving further, there’s a single camera setup at the back, disguised to look like a dual-camera module unless noticed carefully- it’s just a lens covering with AI Cam badging. Following this, we have separate brandings for Spark and Tecno with the former given right below the cameras. As you’d notice, there’s no fingerprint scanner on the device, and the back looks clean for the most part.

Flipping the phone over to the front, you’ll be welcomed by a 6.1-inch IPS LCD display with an HD+ resolution of 1560 × 720 pixels and water-drop notch on top. Furthermore, the panel boasts of a 19:5:9 aspect ratio and an 85 percent screen-to-body ratio. The display has good viewing angles and apt sunlight legibility (thanks to the peak brightness of 450nits). However, the colors could’ve been better. Overall, it’s quite decent considering the super low price of the phone and is fairly good for watching movies and videos. That said, don’t expect it to impress binge-watchers by any means.

Talking of ports and placements, the phone gets a micro-USB port, along with a 3.5mm headphone jack at the bottom. Whereas, the power button and the volume rocker are given to the right. This is followed by a speaker grille given the old-school way, below the Tecno branding at the rear. Surprisingly, the phone comes with a removable battery, which is followed by a dual SIM slot, and a dedicated micro SD card slot. All-inclusive, the Tecno Spark Go looks quite premium and feels solid in hands. However, we aren’t really a fan of those huge side bezels given on the front. 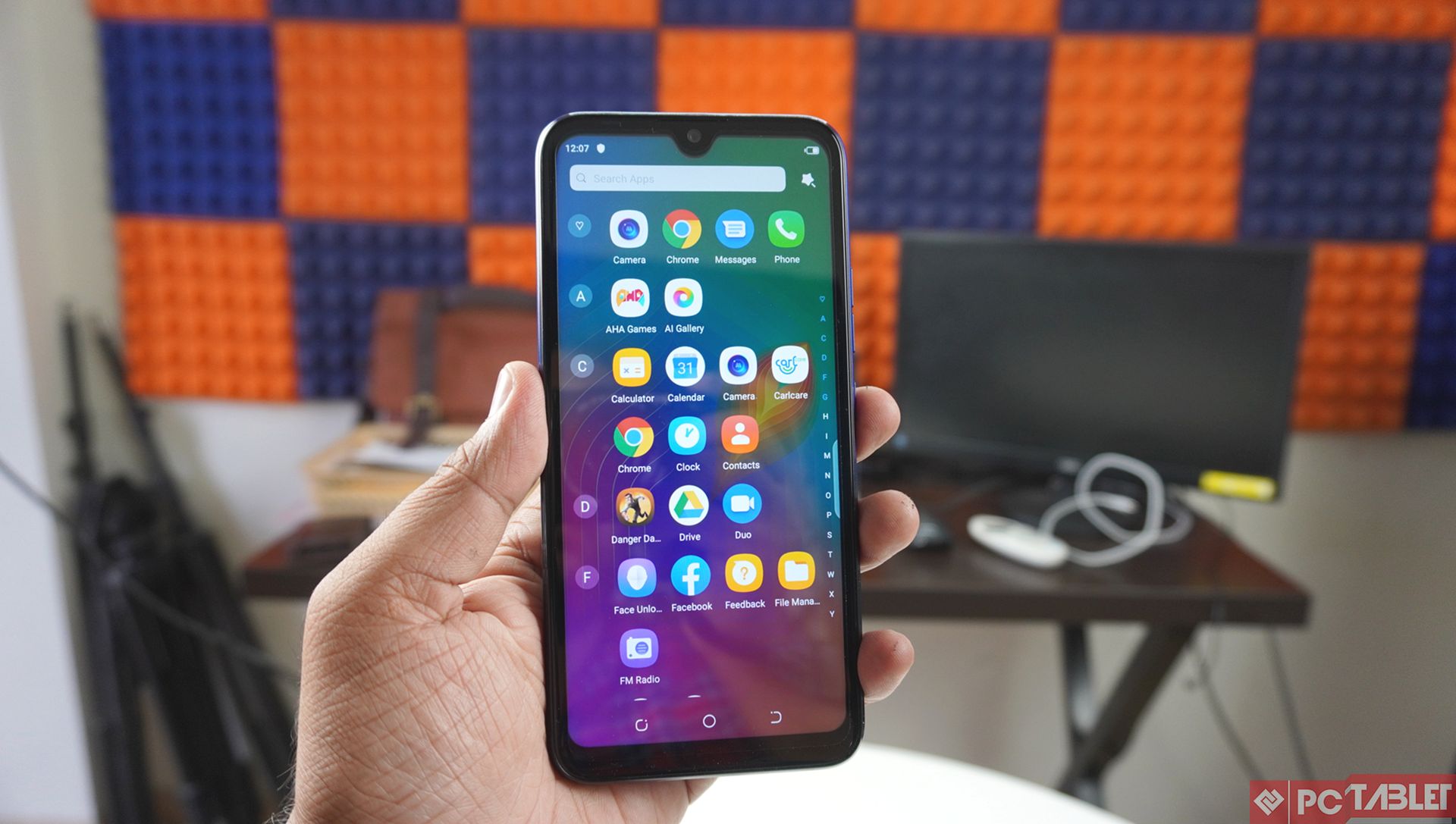 Powering the phone at its core is the quad-core MediaTek Helio A22 SoC, paired with 2GB RAM and 16GB internal storage. And while the storage is quite low to cope with, one can expand it further up to 256GB using a dedicated microSD card.

In our day to day experience with the phone, we didn’t face any stuttering or slow down issues. The phone performed very well in performing basic tasks like calling, texting, using social media apps and browsing the web. However, note that it starts struggling when pushed to limits for obvious reasons- it’s a basic phone with limited resources at the end of the day. The 2GB RAM acts as a bottleneck for multi-tasking while the underpowered chipset makes it challenging to play heavy games on the device.

Moving on to the software front, the Tecno Spark Go runs on the company’s custom skin HiOS 5.0, based on Android 9.0 Pie. Unlike other custom skins, you get an app drawer in this UI. Plus, there are some useful features like one-handed mode, screen recording, scrolling screenshots, 3-finger screenshot, and the ability to silence the phone by flipping it over.

However, there’s a sizeable amount of bloatware including apps like Opera News, Messenger, PHX Browser, Facebook, etc. And since the phone skimps on a fingerprint scanner, Tecno has also added a face-unlock option that works reliably well. 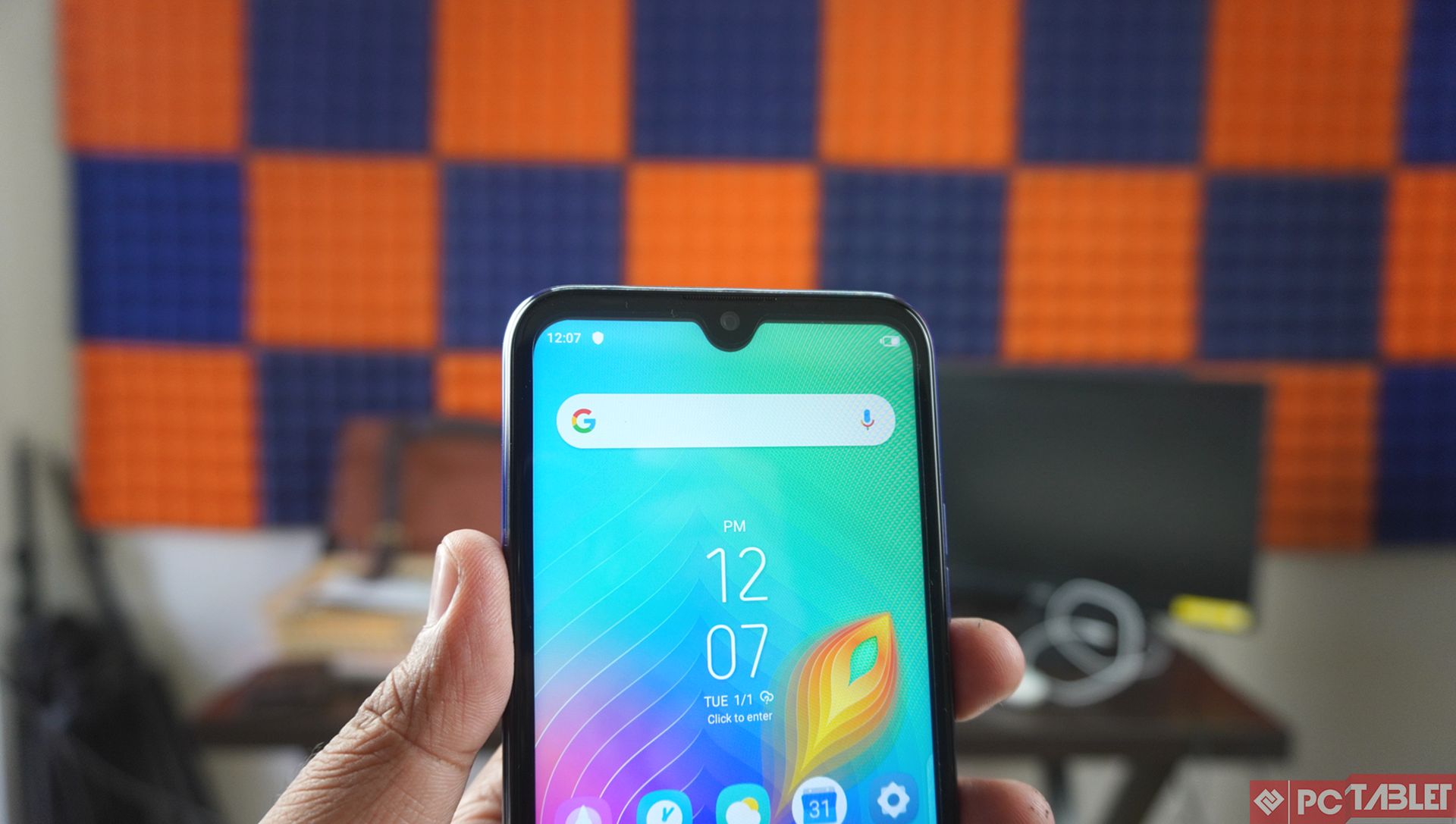 For photography, the Tecno Spark Go offers a single 8-megapixel AI camera at the rear with f/2.0 aperture. There’s also an accompanying dual-LED flash for photos and video in low lights, followed by nifty software features including Night Algorithm 2.0, AR Shot, AI CAM, Portrait Mode, HDR, Panorama and more. Whereas, at the front, it gets a mere 5-megapixel shooter housed in the water-drop notch, alongside a micro slit front flash for selfies.

In daylight, the phone clicks decent quality pictures with natural colors and well-balanced exposure. That said, don’t expect the images to be too sharp as it’s just an 8-megapixel shooter. Also, the dynamic range ain’t that great, so keep that in mind. The selfie performance also seems to be passable in daylight, producing good enough images for social media. Anyways, both the cameras suffer in low-light and this being a budget phone is not meant for photography enthusiasts.

Evidently, the phone is powered by an average-sized 3,000mAh battery. Interestingly, it’s a removable cell that is rarely seen these days and has its own advantages.

After using the device extensively for a few days, we found the battery life to be average at its best. While the phone easily manages to last for a full working day, it’s nowhere near the massive 4,000mAh+ cells offered by the competition.

On the connectivity front, the phone supports 4G VoLTE on both the sim cards, Wi-Fi, Bluetooth, GPS, dual-SIM, 3.5mm audio jack and a micro USB port. It also has all the basic sensors including proximity, gyroscope, accelerometer and more. 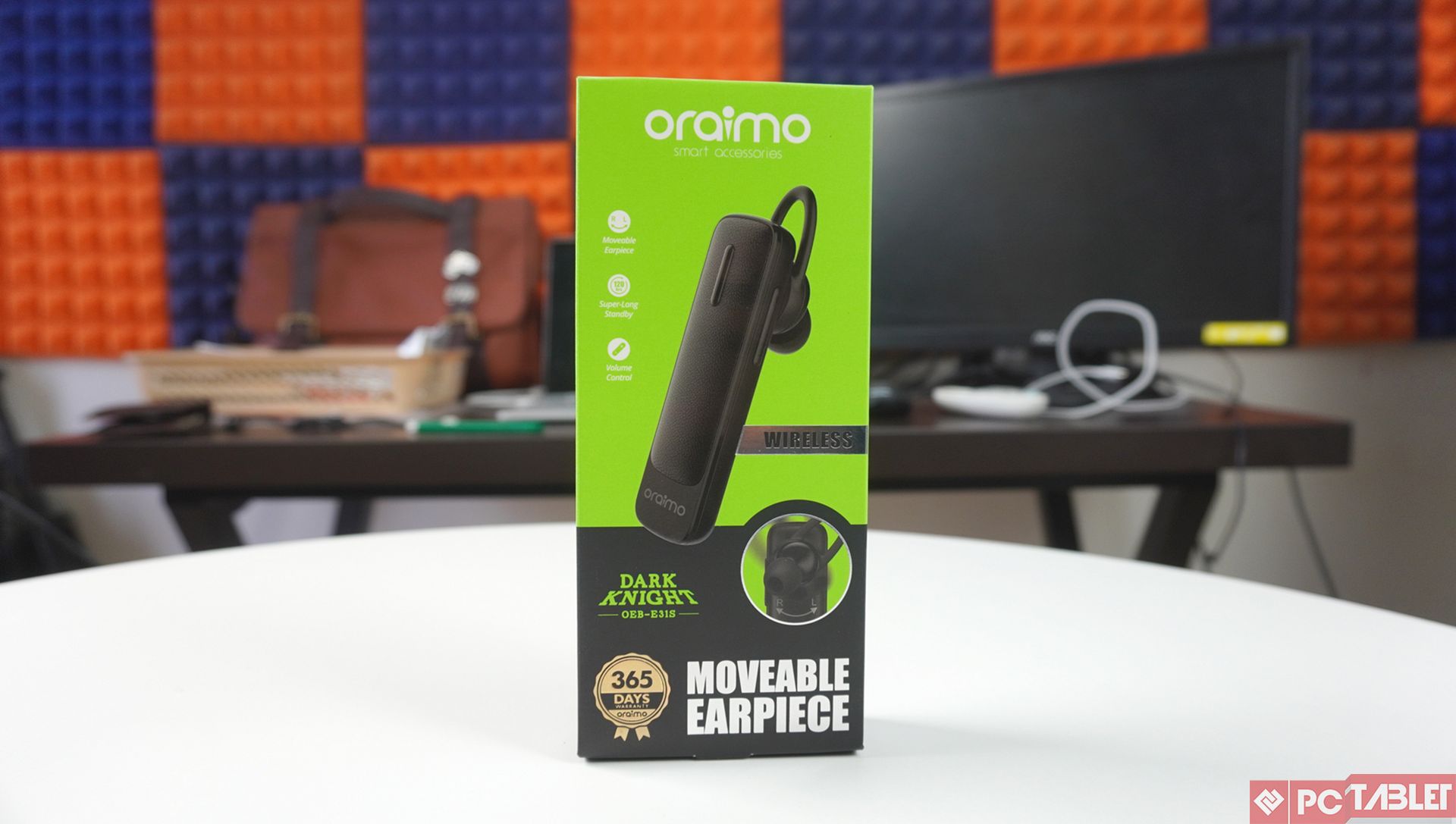 Evidently, Tecno Spark Go is a value for money phone meant for basic usage, especially for the first time smartphone owners. It offers a fresh design, compact form factor, and decent performance for a price of just Rs. 5,499. And to make the deal more tempting, Tecno is also offering Bluetooth earphones worth Rs. 799 for free.