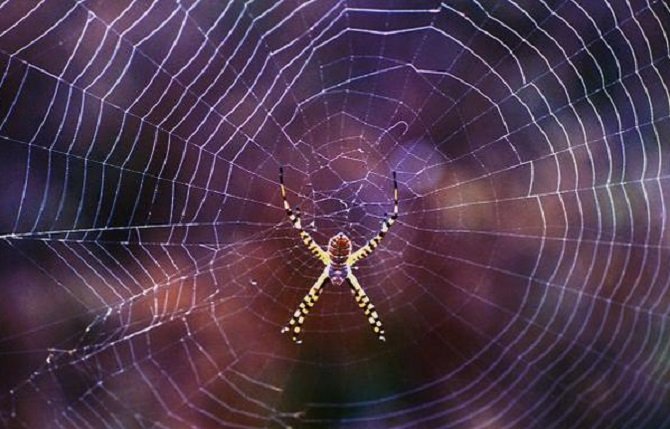 July 25, 2015: Researchers in Kerala have discovered six more new species of spiders in Kuttivanam of Aluva Sivarathri Manappuram, establishing ecological diversity around the banks of Periyar once again.

One species named Argyrodes has associated with the family of a black widow- the world-famed venomous spider.

Among all the newly found species, Argyrodes probably seems to be the most interesting one and is characterized by an orange body with green patches all over.

With the size of a housefly, this species lives in its irregular web made between green leaves. The species also attaches globular cocoon to the web, according to the study.

The study and research was conducted by the researchers of Biodiversity Research Centre of Christ College, Irinjalakuda, lead by Dr. Sudhikumar A V.

The team has already spotted 49 spider species in Kerala, and the research will be published in upcoming volumes of “Encyclopedia of Life”, reports New Indian Express.

Two more found species in the new study, characterized by yellow and green color respectively, are under the category of long-jawed spiders.

The yellow one has four black spots on the back of abdomen, while the green species have white colored scales. These species relate to the genus ‘Tetragntha’, found in the jungles of Kuttivanam.

The new member located in the area is “Trachelas”, which has sparkling eyes and dark brown head. The species live between folded leaves and is nocturnal.

Another new species found in Kuttivanam is from genus ‘Dendrolycosa’, which feeds on water insects and lives on green leaves and moist grasses.

The other newfound species include one from “Chrysso” genus, which is known for its black and glossy body characterized by brownish legs.