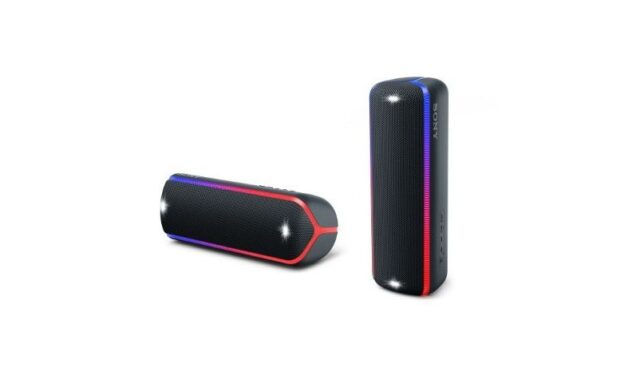 Sony has launched a new range of extra bass Bluetooth speakers in India. These include SRS-XB32 and the SRS-XB22 priced at INR 7,490 and INR 10,990 respectively.

The SRS XB22 gets IP67 waterproof and dustproof ratings, just like all current extra bass portable speakers. Besides, it’s also rustproof and dustproof. The speaker also comes fitted with party lights that can be activated while playing music. It also works with the Sony Music Center app and Fiestable app giving users the ability select playlists, adjust sound, change lighting patterns, and more.

Besides, the SRS-XB22 also comes with support for Google Assistant/Siri via voice assistant features. Sony claims that XB22 offers up to 12 hours of playback time on a single charge. Besides, users can also charge their smartphone via the portable speaker.

Apart from the SRS-XB22, Sony also launched the SRS-XB32 at a price tag of INR 10,990. This model is essentially a larger version of the SRS-XB22 carrying the same features as its smaller sibling. However, it has a few additional features such as multi-colour line LED lights that can be customised with different patterns using compatible apps. Sony promises that XB22 offers a battery backup of up to 24 hours along with built-in mic.