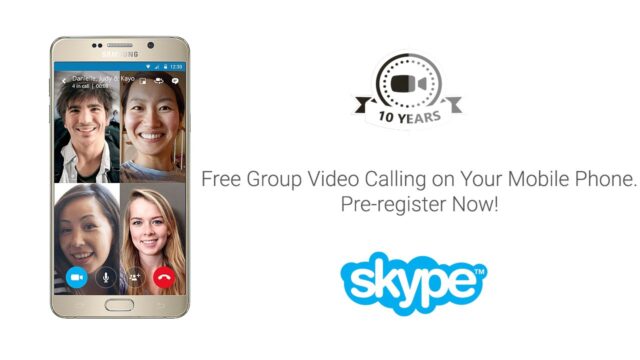 To celebrate ten years of video calling, Skype announced that it’s bringing free group video calling feature on all major platforms like Android, iPad, iPhone and Windows 10 Mobile. The company said that they will be rolling out this new feature in coming weeks, but if you want to preview first, pre-register through Skype’s website here.

In the latest update earlier this month, Skype also introduced to the ability to “Send video messages to groups directly from group chats.”

It has been a decade since Skype changed the way people connect with their loved ones. Six years ago, the company innovated one-to-one video calling feature on mobile phones. And now, Skype has a userbase of over 750 million active users and lots of new features have been added like video messaging, real-time speech and instant message translation.

Skype group video calling service lets up to 25 users share a video call on the desktop. However, it’s not the only one with such kind of feature.

Rival apps such as Google Hangouts also supports group video calling for up to 10 users. Line, Viber, WeChat, and other popular VoIP apps also have same the feature.

In a blog post, Corporate Vice President of Skype, Gurdeep Patil stated that this new feature would be brought out to millions of users in weeks to come. However, the Microsoft officials also added that over a period of time, users would have to pay for Skype group video calling.