Samsung is delivering messages to Galaxy S7 smartphone owners to remind them that their handsets are safe. According to reports, the company has decided to reach out to individual customers with a reminder that their Galaxy S7 and Galaxy S7 Edge phones are safe. 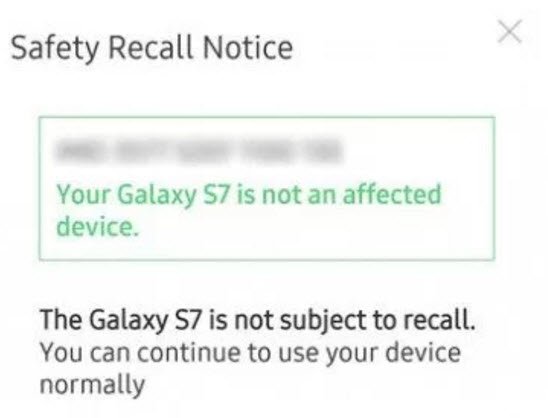 According to industry analysts, the recall and subsequent suspension of Samsung Galaxy Note 7 will directly affect the company in a significant way. There are reports that company will suffer huge losses and shares on the market declined considerably after the announcement. The damage caused to the brand as a whole as a result of Galaxy Note 7 fiasco will affect the company in the long run.

With the launch of Samsung Galaxy S8 around the corner, it is essential for the company to keep in touch with their customers. The company will have to reveal the facts about what actually caused the Note 7 disaster. Moreover, Samsung should take steps to prevent these kinds of problems in the future by establishing partnerships with credible companies for spares.

The news desks of reputed tech portals are quite busy since the last one month with coverage of Samsung Galaxy Note 7. They reported that the phones are being recalled. However, some people heard that a Samsung 7 handset exploded. This had forced the company to deliver messages to customers stating that their handsets are safe.

Even though Samsung has not revealed the main reason for the Note 7 debacle, tech enthusiasts are of the opinion that the battery integrated with the device was an inferior. We wonder how the quality control department of the company failed to detect the problem during testing time.

No doubt, people are afraid when they hear about Samsung. Moreover, the confidence in the currently available phones and tablets are not great among customers. If the sale of Samsung Galaxy S8 declined, it will be a big disaster for the company.

Samsung has not offered any explanation about the messages being delivered. However, we infer that the company will push this notification to all S7 and S7 Edge owners in a phased manner.