Samsung is again in news for all wrong reasons. The Samsung Galaxy S7 exploded in the owner’s hands causing serious second and third-degree burns. According to Amarjit Mann, the phone was in his pocket when he felt warmness. When the 34-year old car driver took the handset out of his pocket, the handset exploded in his hands. He responded to the media by stating that the Galaxy S7 is a bomb you can carry.

During the time of the blast, the windows of his car were open. Hence, he was able to throw the phone out of the car. He also said that the phone stuck to his hands. Mann had to self-drive the car to a nearby friend’s home and he was rushed to the hospital. He didn’t call police or dialed emergency services for help.

Imagine if the phone was (at my ear); my whole face would’ve burnt

Mann will file a lawsuit against Samsung

There are reports that Mann is currently planning to file a lawsuit against Samsung. He had to undergo immense pain from the explosion with both his left and right hand dressed. We can see the only portion of his fingers. He also said that he lost wages because he is unable to drive. 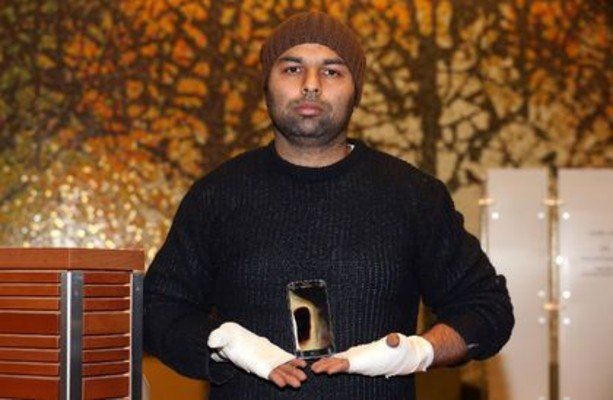 In his statement, Mann disclosed that he took the handset out and had it in my hands and it exploded right away. When he saw the smoke, he was really shocked. He never expected this thing and it was really a nightmare.

Mann purchased Samsung Galaxy S7 handsets nearly 6 months ago for $1000. He established contact with his carrier and was advised to contact Samsung directly. Meanwhile, doctors advised him to take rest and informed that it will take nearly 10 days for the wound to heal. We expect that complete recovery will take nearly two months.

Samsung is facing tough times especially the company had to recall Note 7 within weeks after the official launch. The company discontinued the production and asked consumers to replace the phone with Galaxy S7 and Galaxy S7 edge. In the meantime, an Ontario-based couple is gearing up to file a class-action lawsuit on behalf of Canadian customers.