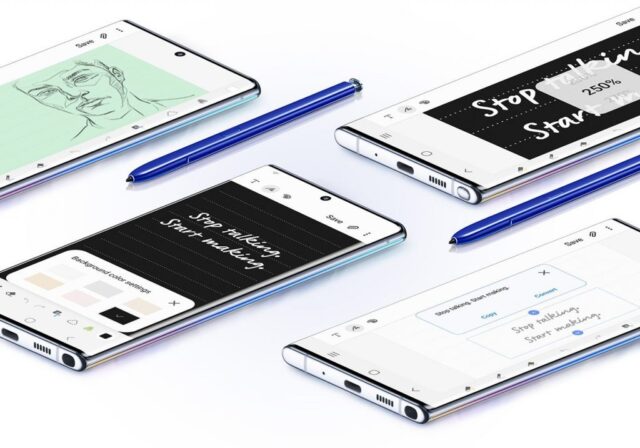 Samsung has now finally launched the all-new Samsung Galaxy Note 10 and Note 10+ at an event held in New York yesterday. The Galaxy Note 10 duo offers a dynamic AMOLED Infinity-O display, in-display ultrasonic fingerprint scanner, and a Bluetooth-enabled S Pen. Also, while the company has unveiled 5G models as well, India will receive only the 4G LTE variants for obvious reasons.

Evidently, both the Samsung Galaxy Note 10 and Note 10+ offer identical specifications. However, they do have differences in certain aspects, including display sizes, RAM & storage, rear cameras, and battery capacities.

Speaking of the Samsung Galaxy Note 10, it offers a 6.3-inch full-HD+ (1080×2280 pixels) Infinity-O Display with a Dynamic AMOLED panel that supports dynamic tone mapping. The screen also supports HDR10+ playback and comes with Corning Gorilla Glass 6 protection. Akin to the Galaxy S10, the Note 10 gets an ultrasonic in-display fingerprint scanner underneath.

Under the hood, it gets powered by 7nm-based octa-core Exynos 9825 SoC with Mali-G76 MP12 GPU. Furthermore, it comes with 8GB of RAM, and 256GB of UFS 3.0 storage with no option for expandability.

For photography, the phone gets a triple camera setup at the rear. This comprises of a 12MP Dual Pixel primary camera with f/1.5-f/2.4 variable aperture and OIS. There’s also a 12MP Telephoto lens with 45° FoV, OIS and a 16MP 123° Ultra Wide sensor. Whereas, for selfies, the phone bears a 10-megapixel sensor with autofocus, an f/2.2 aperture, and an 80-degree field of view, housed in the punch-hole.

Amongst other features, we have IP68 water and dust resistance, stereo speakers with Dolby Atmos. As noted, it also comes with the all-new S Pen that features a 6-axis sensor with a gyroscope and acceleration sensor. It sports air actions, customizable gesture controls, and lasts 10 hours on a single charge.

The phone runs Android 9.0 Pie with the company’s One UI on top and is backed by a 3,500mAh battery. It also features fast wired charging, fast wireless charging, and PowerShare feature. In-box accessories include a 25W fast charger and USB Type-C earphones tuned by AKG (there’s no 3.5mm audio jack on board). Lastly, the connectivity options include Dual 4G VoLTE, Wi-Fi 802.11ax (2.4/5GHz), VHT80 MU-MIMO, Bluetooth 5, GPS+GLONASS, NFC, and MST.

The Samsung Galaxy Note 10+, on the other hand, features a similar display but with a larger 6.8-inch size and Quad-HD+ (1440×3040 pixels) resolution. It offers a massive 12GB of RAM, with two storage options – 256GB and 512GB. Unlike the regular mode, storage can be expanded via microSD card (up to 1TB).

In addition to the triple cameras, the Note 10+ has an extra DepthVision Camera (with a VGA or 0.3-megapixel resolution) that can scan an object to create its movable 3D renders.

Besides, the phone features a much larger 4,300mAh battery and supports up to 45W fast charging (45W charger will be sold separately). Note that while the Note 10 is pretty light at 168grams, Note 10+ weighs 196 grams which still is a little lesser than Note 9‘s 201-gram mark.

Consumers who use HDFC Bank credit or debits cards for pre-ordering the device at offline stores and Samsung online shop will get a cashback of Rs. 6,000. While for those using  Amazon, Flipkart, Paytm Mall, or Tata Cliq will be able to avail the same offer on use of ICICI debit and credit cards. Plus, all pre-booking customers will also be eligible to buy the Galaxy Watch Active worth Rs. 19,990 at just Rs. 9,999 with the device.