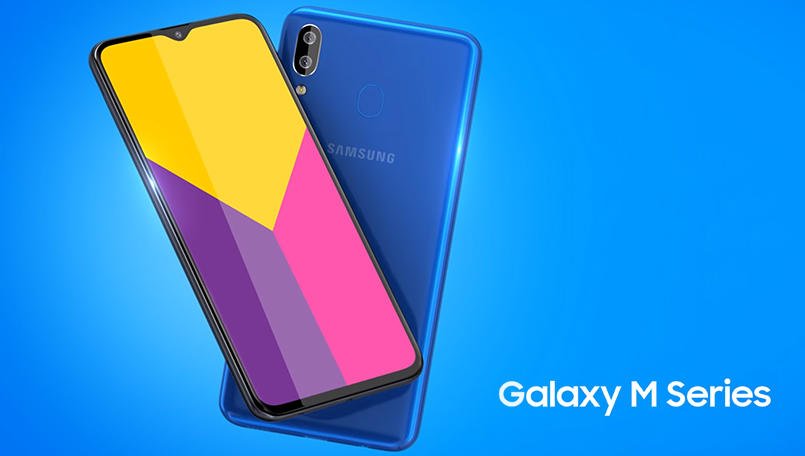 As for the design, both the smartphones go on par with our exclusively leaked renders. The Samsung Galaxy M20 bears an Infinity-V display, known for its dew-drop notch, 19:9 aspect ratio and rounded corners. The notch houses the front camera whereas the earpiece resides on the top frame.

Moving further, the Galaxy M20 gets a vertically stacked pair of dual cameras at the back, accompanied by LED flash and an oval-shaped fingerprint scanner. Not to forget, the handset also features a 3.5mm jack, USB-C port, speaker and a microphone at the bottom frame. Also, the power button and volume rockers are given to the right while the sim-tray sits to the opposite side.

The Galaxy M10, on the other hand, looks nearly the same but lacks a fingerprint scanner. The handset also bears a relatively larger bottom chin, and the speaker grill is placed at the back panel’s bottom.

Being the cheaper of the two, the Samsung Galaxy M10 brings a 6.2-inch Infinity-V Display panel with an HD+ resolution of 720×1520 pixels and 19:9 aspect ratio.

Under the hood, the handset gets powered by 1.6GHz octa-core Exynos 7870 processor. This is the same SoC that we’ve seen on the Samsung Galaxy J6 and Galaxy J7. The M10 comes in 2GB and 3GB of RAM options paired with 16GB and 32GB of internal storage, respectively.

For photography, the Galaxy M10 gets a dual camera set up at the back. The setup comprises of a 13-megapixel primary sensor with f/1.9 aperture, clubbed with a 5-megapixel ultra-wide sensor. There’s a 5MP shooter up front for selfies.

On the software front, the phone runs Android 8.1 Oreo on top of Samsung Experience 9.5 UX. Nonetheless, it is promised to get the Android Pie update by August. A 3,400mAh battery backs all of this.

The company is also touting Widevine L1 support for streaming online in content in high definition. As mentioned, it lacks a fingerprint scanner and relies on Face Unlock instead. Additional features include microSD card slot, a 3.5mm audio jack, a microUSB port alongside basic connectivity options like 4G, WiFi, Bluetooth etc.

Surprisingly, the phone gets powered by the just launched octa-core Exynos 7904 SoC, clocked at 1.8GHz. It is further coupled with Mali-G71 MP2 GPU, 3/4GB of RAM and 32/64GB of storage options. Storage can be expanded up to 512GB using the given microSD card slot.

In addition to the fingerprint scanner, users can also use Facial Recognition to unlock the smartphone. Besides, the handset gets a massive 5,000mAh battery that supports fast charging via a USB-type C port. The company has supplied a 15W fast charging adapter for the same. There is Widevine L1 certification along with support for Dolby Atmos Sound.

Both the smartphones will go on sale via Amazon.in and Samsung India e-store starting from Feb 5, in Charcoal Black and Ocean Blue colour options. As an introductory offer, Jio users can enjoy “Double-Data” on Rs. 198 and Rs. 299 recharge packs.