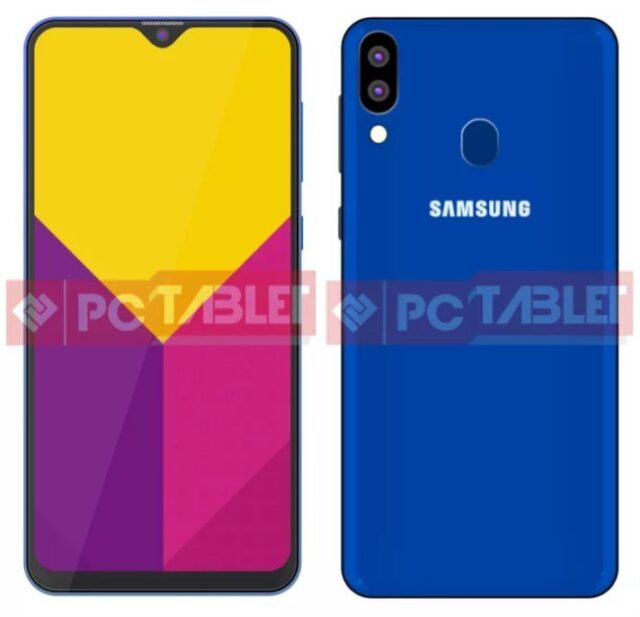 Lately, Samsung has officially announced the launch of its new Galaxy M-series on January 28 in India. Primarily targeted at millennials, it’ll comprise of Samsung Galaxy M20, M10 and M30 smartphones. While the company has merely teased the design on Amazon, we now have the exclusive renders of the Galaxy M20 and Galaxy M10, giving us an idea of the design of the same.

Both the handsets will arrive in Blue and Black colour options. As for the design, the Samsung Galaxy M20 bears an Infinity-V display, known for its dew-drop notch, 19:9 aspect ratio and rounded corners. The notch houses the front camera whereas the earpiece resides on the top frame. Do note that the side bezels aren’t as small as the ones shown in teasers on Amazon. Also, the phone has a significantly large chin at the bottom.

Coming to the back, the Galaxy M20 gets a vertically stacked pair of dual cameras. The same is accompanied by an LED flash which sits next to the oval-shaped fingerprint scanner having a silverish outline. Furthermore, we have a large Samsung branding at the median.

Not to forget, the handset also features a 3.5mm jack, USB-C port, speaker and a microphone at the bottom frame. Also, the power button and volume rockers are given to the right while the sim-tray sits to the opposite side.

Evidently, both the Samsung Galaxy M20 and Galaxy M10 look a lot similar, except for the lack of fingerprint scanner on the latter.

As mentioned, the Samsung Galaxy M20 and Galaxy M10 will be the first smartphones from the company to feature a notch, specifically an Infinity-V display. The Galaxy M10 will reportedly feature a 6.2-inch HD+ display. On the other hand, the M20 is tipped to bring a slightly larger 6.3″ Full-HD+ (2340 x 1080 pixel) panel to the table.

The devices are alleged to have a 13-megapixel primary sensor and 5-megapixel secondary sensor at the back. A 5MP selfie shooter will follow it up front. Nonetheless, as per what we’ve seen in interviews and reports, the secondary camera seems to be a wide-angle shooter. A wide-angle camera and a USB type-C port is something which is hard to find in this segment.

Moving further, the Samsung Galaxy M20 is said to pack a massive 5,000mAh battery while the Galaxy M10 will bear a smaller 3,500mAh battery. Despite booting Android 8.1 Oreo out-of-the-box, the phone will use Samsung’s new One UI (available to flagships). Moreover, the company has indirectly confirmed the arrival of Android Pie update on both the devices in future.

As per the fresh reports, the Samsung Galaxy M10 price in India will start at Rs. 7,990 for the base model with 2/16GB configuration. The 3/32GB RAM and storage variant of the same will retail for Rs. 8,990.

On the other hand, the Galaxy M20 will be reportedly priced at Rs. 10,990 for the 3/32GB variant while the 4/64GB model will cost Rs. 12,990. Both of the upcoming handsets are tipped to go on sale via Amazon.in and Samsung Online Store, starting Feb 5. Stay tuned for more updates.