After a month-long speculation and leaks, Samsung Galaxy C9 with 6GB RAM has been spotted in Geekbench benchmark listing. According to sources, a handset with model number SM-C9000 was spotted on Geekbench and is believed to be that of the upcoming Galaxy C9.

Recently, a smartphone with the same model number was spotted on Indian import-export website Zauba with a retail price of Rs. 17,107. However, the pricing on the import/export website is only declared values. It will not reflect the accurate market price. 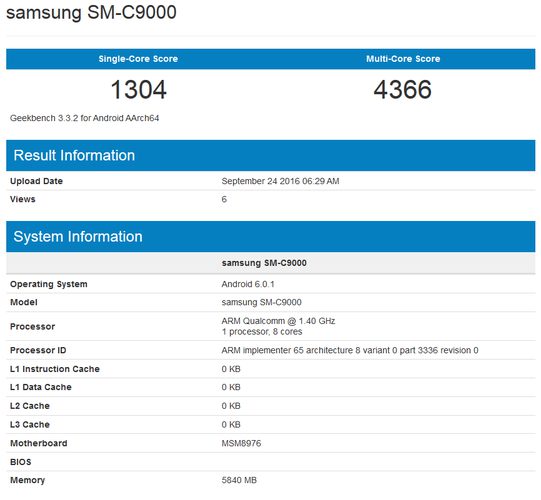 Talking about the Geekbench listing, the rumored Samsung Galaxy C9 is touted to ship with a massive 6-inch display and an octa-core Qualcomm CPU clocked at 1.4GHz coupled with 6GB of RAM. Previously, it was reported that the handset will come with a 5.7-inch display. If you look at the currently available Samsung smartphones, the presence of 6GB in Galaxy C9 is said to significantly higher. Currently, Samsung integrates 4GB RAM with its premium flagship handsets.

Samsung Galaxy C9 will be the largest RAM handset

If the listing of 6GB RAM turns out to be true, it will be the largest amount of RAM Samsung has ever infused in a smartphone. According to industry analysts, Samsung is experimenting with 6GB RAM because the Galaxy Note 8 will most likely include 6GB RAM.

As per rumors, the Samsung Galaxy C9 will be loaded with Android 6.0 Marshmallow although other specifications look almost similar to that of Samsung Galaxy A9.

Previously, there was a rumor that Samsung will unveil a 6GB RAM variant of the Galaxy Note 7 in China. Commenting on the rumor, Samsung mobile division chief revealed that the company is facing intense competition from the Chinese rivals. Hence, the need for 6GB RAM variant is important. However, the move was possibly curtailed with a series of explosions triggering Samsung Galaxy Note 7.

Meanwhile, SamMobile has reported that the smartphone major is working on Galaxy C5 Pro and Galaxy C7 Pro, which will be most likely unveiled before the end of 2016. However, both the smartphones are dubbed to accompany with mid-range specifications.

Since the Samsung Galaxy C series is already available in China currently, we infer that the Galaxy C9 will launch in China, to begin with. We can expect the launch in India after 4 or 5 months.

We don’t have any official confirmation as to whether when the Galaxy C9 will launch. Moreover, we are not sure if it ships with 6GB RAM. Hence, you should accept these rumors with a grip of salt till the company spills the beans.