The company will reportedly bundle the JioLink Wi-Fi hotspot package with unlimited data and access to all Jio applications for 90 days, which includes JioPlay and JioOnDemand.

The JioLink is basically outdoor customer premise equipment (CPE), which features a unidirectional antenna. They are usually fixed on top of the terrace to establish connectivity with the telecom company’s high-speed data networks.

By integrating with an indoor Wi-Fi router, the customer will be able to experience high-speed data connectivity even though they are not actually using 4G services.

The JioLink unit features an RJ45 port paired with the antenna through a Cat5/Cat 6 cable. Moreover, the company sources revealed that the JioLink will be launched commercially in the next few months to address poor indoor range/speeds. 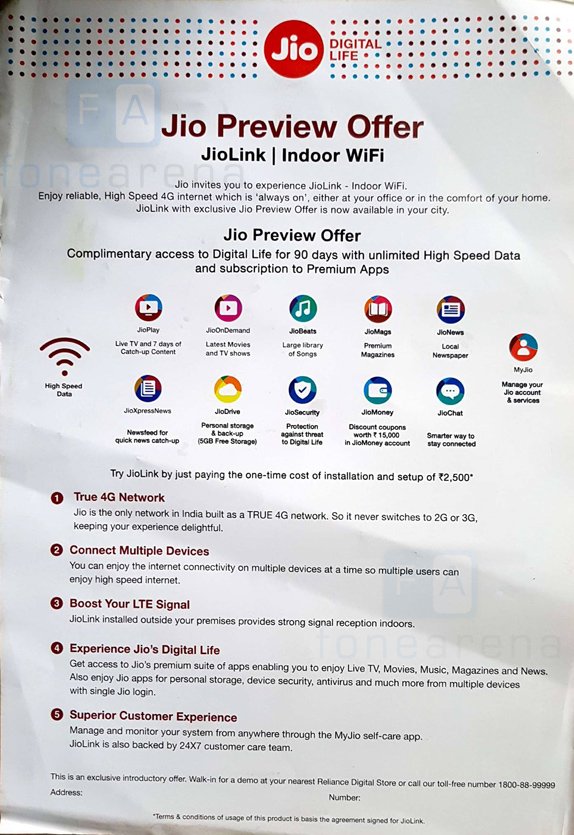 Technically, the JioLink hotspot is a 4G MiFi/Wireless hotspot with an external antenna and unlimited battery life. However, the company hasn’t provided an answer to a query about the possible damage to the unit during the rainy season.

As of writing this, the JioLink is not publicly available for purchase from Reliance Digital Stores. The Preview offer is available in select cities across India. However, the device will be available for Rs. 2,500 including installation and setup of the whole solution.

Reliance Jio is expected to launch in August. Even though there are conflicting reports regarding the launch of 4G services, the company will probably unveil the service on August 15 across select cities in India.

However, with the adoption rate of 4G looks very low, Reliance is considering an alternative system to enable 3G users to take advantage of their flagship 4G services.

The tariff charges for the forthcoming Reliance Jio 4G services were recently leaked to the media. The company is gearing up to launch 4G services to attract customers by introducing a wide range of apps in addition to access to songs, magazines, newspapers and up to 5GB of free cloud solution for storage.