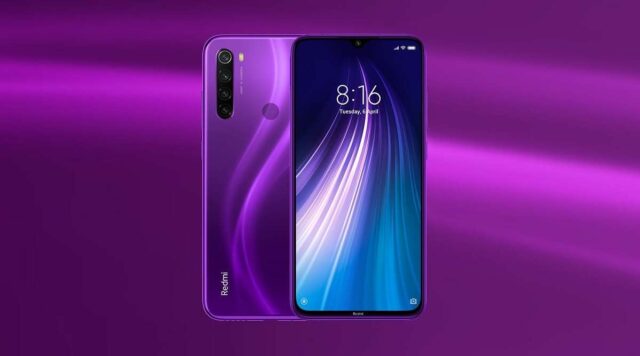 Xiaomi lately launched the Redmi Note 8 (Review), alongside the Redmi Note 8 Pro (Review) in India. And as expected, the new Note has received a great response with over 1 million sales within a month. That said, the company has now unveiled a new colour option for the device, dubbed as ‘Cosmic Purple.’

Up till now, the phone was available only in three colour options, including Neptune Blue, Moonlight White, and Space Black. However, the company took a step ahead and unveiled a new Cosmic Purple option for the Redmi Note 8, earlier today on Twitter, alongside a short product video.

For starters, the Cosmic Purple Redmi Note 8 looks identical to the Nebula Purple option launched recently in China. The new paint job will be available for all the variants starting Rs. 9,999 and will be up for sale on both Mi.com and Amazon India. The first sale will begin at 12 PM (IST) on November 29th, with the start of Xiaomi’s Black Friday Sale, ending December 2.

The Redmi Note 8 comes with a 6.3-inch IPS display having a Full HD+ (2340 ×1080 pixels) resolution and waterdrop notch on the top. It boasts of a 19:5:9 aspect ratio and a screen-to-body ratio of 90%. Plus, the display comes with Corning Gorilla Glass 5 protection, followed by TUV Rheinland eye protection certification.

Under the hood, the device is powered by Qualcomm Snapdragon 665 SoC, coupled with Adreno 610 GPU, akin to the Mi A3. It is available in 4/64GB and 6/128GB RAM and storage variants.

In the camera department, the Note 8 gets a total of four lenses at the rear. This includes a 48MP Sony IMX586 sensor with f/1.79 aperture, an 8MP 120° ultra-wide-angle lens, and a 2MP depth sensor. There’s also dedicated 2MP macro camera for 2cm macro shots. For selfies, the phone bears a 13MP front camera with an f/2.0 aperture.

Amongst other specifications, the phone runs MIUI 10 based on Android 9. However, Xiaomi has claimed MIUI 11 update by the year-end. Powering the phone is a massive 4,000mAh battery that supports 18W fast charging. This time, Xiaomi is providing a fast charger within the box.