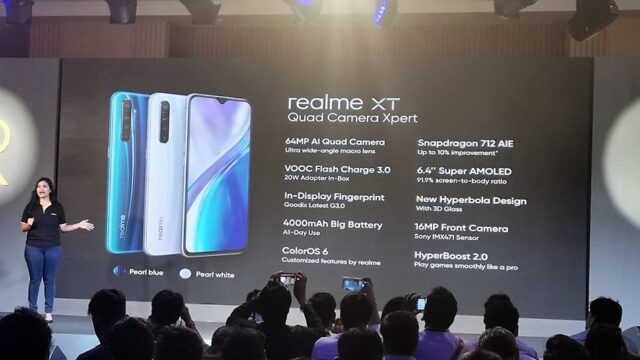 A while after launching the phone in China, Realme has now finally unveiled the Realme XT  price and availability for the Indian market. Notably, it’s a Realme X-sibling that boasts of a 64MP quad-camera setup, Snapdragon 712 SoC and a massive 4,000mAh battery as its main highlights. That said, let’s talk about the phone’s specs and features in detail.

The Realme XT comes with a 6.4-inch Super AMOLED display with a Full-HD+ resolution of 2340 × 1080 pixels and a waterdrop notch on top. Furthermore, the phone touts the presence of Corning Gorilla Glass 5 protection on both sides.

Just like the Realme X, there’s an in-display fingerprint scanner underneath the panel. Moreover, it’s said to have Widevine L1 certification, that means you’ll be able to stream content on Netflix and Prime Video in HD resolution.

Under the hood, the phone gets powered by 10nm-based octa-core Qualcomm Snapdragon 712 AIE SoC, coupled with Adreno 616 GPU. It packs up to 8GB LPPDDR4x RAM and up to 128GB UFS 2.1 storage which is expandable up to 256GB with microSD.

For photography, the Realme XT gets a total of four cameras at the rear. This comprises of a 64MP ISOCELL GW1 sensor with f/1.8 lens as the primary shooter, followed by an 8MP 119° ultra-wide-angle lens, a 2MP depth sensor, and a 2MP camera for 4cm macro shots. There’s also a 16MP front camera with Sony IMX471 sensor and f/2.0 aperture for selfies.

Alongside the phone, the company has also unveiled two new accessories including Realme Buds Wireless and Realme power bank in the country. The new Realme Buds Wireless neckband earphones will pack 11.2mm bass boost driver, Bluetooth 5.0 support, 3-button remote and 12-hour battery life. It will be sold in Orange, Green, and Black colours at Rs. 1,799 via Flipkart and Realme.com.

The Realme power bank, on the other hand, offers 10,000mAh capacity with support for 18W fast charging with dual-output (USB-A/ USB-C). It will go on sale in September end at Rs. 1,299, followed by the typical Realme iconic case for Realme XT at Rs. 399.

Additionally, Realme has also announced it’ll launch a new phone dubbed as Realme XT 730G in December. The phone will be a variant of the Realme XT with gaming-centric Qualcomm Snapdragon 730G SoC and 30W VOOC fast charging support while the rest of specifications will stay the same.