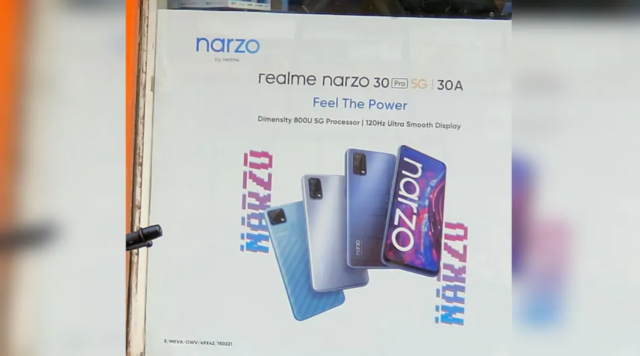 The Realme Narzo 30 series is just weeks away from its official launch in India, which is expected to happen in the last week of February. And now, a poster depicting the Narzo 30 Pro 5G and Narzo 30A has emerged online, hinting at those two models being in line for launch first.

The company has already begun building up some hype around the models and has been teasing the Narzo 30 series since last week. In a bid to involve greater fan interaction, the company even asked them to select a design that they feel will be best suited for the box of the Narzo series of phones.

Unfortunately, there is nothing much else that we know of the series even though there is speculation the Narzo 30 series will again comprise of a three-model line-up as it has been with the Narzo 20 series. The Narzo 30 Pro 5G and Narzo 30A are already seemingly confirmed though the series is also expected to include the Narzo 30 as well which will serve as the entry-level model.

With the Narzo 30A, what you have is a triple camera arrangement with the sensors accommodated within a square module. The rear is also shown to have a fingerprint sensor with the back panel done up in a shade of blue and sporting a patterned design, all of which does look nice.

In another revelation, the Narzo 30 Pro was also known to have been spotted at a TENAA listing where the phone is shown to come with a 6.5-inch display on the front and, intriguingly, a triple camera setup at the rear. In between, there is a 5000 mAh battery that keeps everything moving.

Keep watching for more details on this as it emerges.