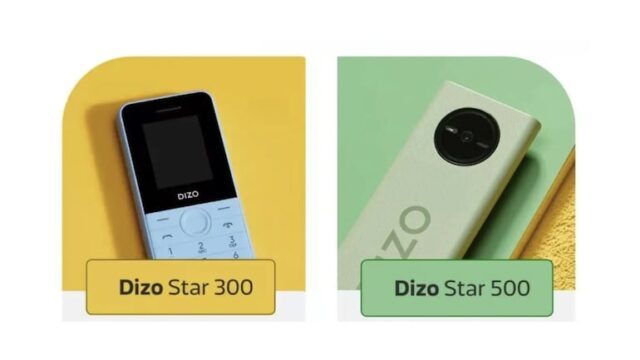 The Dizo Star 500 is clearly the more up-market version among the two and comes with a 2.8-inch color display which however is not touchscreen enabled. There is 32 MB of RAM onboard, as is 32 MB of native storage, the latter being expandable to 64 GB via microSD cards. There is a 0.3 MP VGA camera on the rear as well, complete with an LED flash. A 1900 mAh battery keeps things going.

Another positive with the phone is its support for several Indian regional languages. Those include Hindi, Tamil, Gujrati, Telegu, Kannada, and so on. The phone otherwise sports a block design with curved edges that makes it easy to hold and operate. Beneath the display lies the T9 keypad for operating the phone.

The Dizo Star 300 comes with a slightly smaller 1.77-inch color display, which again lacks touch support. There is the same 32 MB of memory and 32 MB of storage onboard, the latter being expandable to a max of 64 GB by way of microSD cards. Then there is the 0.3 MP VGA camera on the rear too, as is an LED flashlight. Interestingly, the Dizo Star 300 comes powered by a larger 2550 mAh battery. The overall design remains largely boxy but with curved edges that make it comfortable to hold and operate with one hand.

A T9 keypad is common to both phones, as are other features such as Bluetooth, music player, voice recorder, FM radio, file manager, and a 3.5mm headphone jack, among others.

As already stated, the Dizo Star 500 is priced at Rs. 1,799 while the Dizo Star 300 comes for Rs. 1,299. Both the feature phones are going to be available from Flipkart though the exact launch date is yet to be revealed.