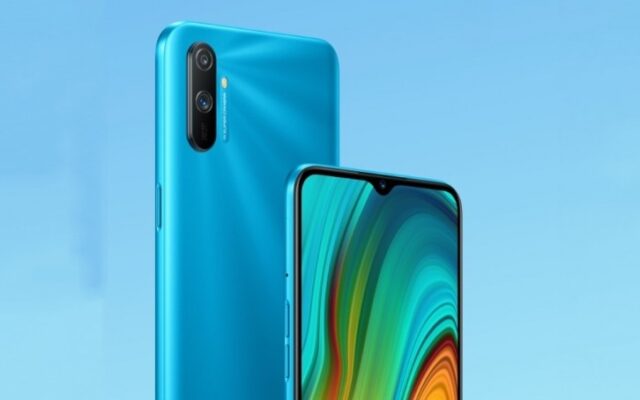 After teasing the device for a while, Realme has now finally launched the Realme C3 smartphone in India. Being a successor to the last year’s Realme C2, the new device boasts of MediaTek Helio G70 SoC, a massive 5,000mAh battery, and dual rear cameras as its main highlights.

Besides, the phone also gets a design overhaul and brings some new features to the table. However, it still lacks a fingerprint scanner and relies on face unlock. Let’s check its specifications and pricing in detail.

The Realme C3 comes with a 6.52-inch IPS display with an HD+ resolution of 1600 x 720 pixels and a water-drop notch on top. The panel features Corning Gorilla Glass 3+ protection and touts an 89.8% screen-to-body ratio.

Powering the phone at its core is the new MediaTek Helio G70 which is a gaming-oriented chipset for entry-level phones – apparently a toned-down version of Helio G90, built on 12nm process. It is paired with either 3GB or 4GB of LPDDR4X RAM and 32GB or 64GB of internal storage. And the latter can be expanded further using the dedicated microSD card slot given onboard.

For photography, there’s a dual-camera setup at the rear. It includes a 12-megapixel snapper with f/1.8 aperture, 1.25μm ultra-large single-pixel area and PDAF, along with a 2-megapixel depth sensor having f/2.4 aperture. For selfies, you get a 5-megapixel AI-camera upfront.

Realme C3 is the company’s first phone to boot the all-new Realme UI based on Android 10, out of the box.

Other notable features include Face Unlock and Dual-mode music share which allows simultaneous playback through the phone’s 3.5mm audio jack and Bluetooth. All of this is backed by a massive 5,000mAh battery with support for standard 10W charging. It is still using the dated micro-USB, though.

The Realme C3 price in India starts at Rs. 6,999 for the base model with 3/32GB RAM and storage configuration. The 4/64GB model, on the other hand, will retail for Rs. 7,999. The phone will go on sale in Blazing Red and Frozen Blue colours via Flipkart and Realme Store starting at 12 pm on February 14. It will also be made available offline from February 20.

Besides, the company is also offering a bunch of launch offers which include Jio benefits worth Rs. 7,550 and minimum Rs. 1,000 off on exchange during the first sale on Flipkart.