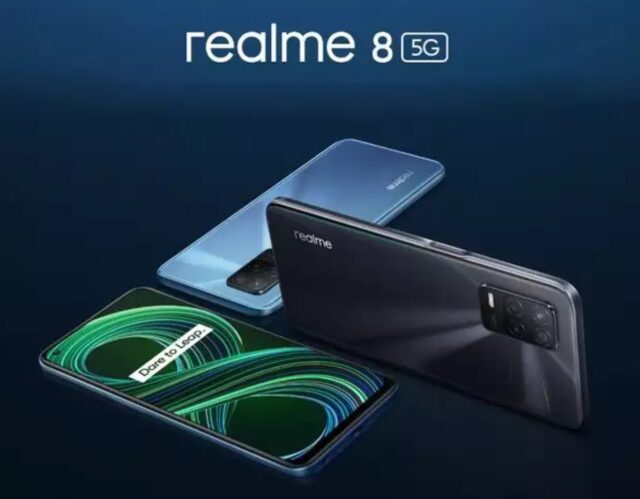 The Realme 8 5G happens to be the newest mid-range phone to launch in India. The phone is also special in that it is the first to launch in India featuring the octa-core MediaTek Dimensity 700 chipset. The other highlights of the phone include a triple-lens rear camera as well as a hole-punch display for the selfie cam.

Also, it has been just last month that the company had launched the Realme 8 and the Realme 8 Pro in India. The latest Realme 8 5G can be considered as an upgrade over the two and comes with Dynamic RAM Expansion (DRE) technology which lets the phone allocate native storage into virtual RAM if the need so arises.

The new Realme 8 comes with a 6.5-inch full HD+ 1080 x 2400 pixel display with the Dragontrail Glass on top for added protection. The display has a 20:9 aspect ratio and a 90 Hz refresh rate while offering 600 nits of peak brightness.

As already stated, the phone comes powered by the octa-core MediaTek Dimensity 700 SoC that is paired with the ARM Mali-G57 MC2 GPU. Further, there is 8 GB of LPDDR4x RAM on board, as is 128 GB of UFS 2.1 storage. Then there also is the DRE technology at work which acts to convert native storage into virtual RAM whenever there is the need for extra memory. The internal memory again is expandable to a max of 1 TB via microSD cards.

Coming to optics, there is the triple-lens camera arrangement at the rear which comprises of a 48 MP Samsung GM1 sensor with f/1.8 aperture which acts as the primary camera. Complimenting the same is a 2 MP monochrome sensor having an f/2.4 aperture along with another 2 MP tertiary lens for macro shooting which too has the same f/2.4 aperture.

Assisting the camera hardware is some advanced AI-based software that allows for specialized modes such as the Nightscape Mode, 48M Mode, Pro Mode, AI Scan, and Super Macro. Then there also is the 16 MP front shooter with an f/2.1 lens for video calls and selfies. The front cam too offers camera features like Portrait, Nightscape, and Timelapse.

The Realme 8 5G supports the following connectivity options – 5G, 4G LTE, Wi-Fi 802.11ac, Bluetooth v5.1, GPS/ A-GPS. There also is the USB Type-C port for charging and data transfer. For security, there is a fingerprint sensor on the side. Sensors that the phone comes with include an accelerometer, ambient light, magnetometer, and a proximity sensor. Keeping the lights on is a 5,000 mAh battery backed by an 18 W charger.

The sale starts on April 28, 12 noon onwards via Flipkart and Realme.com along with other offline locations across the country.