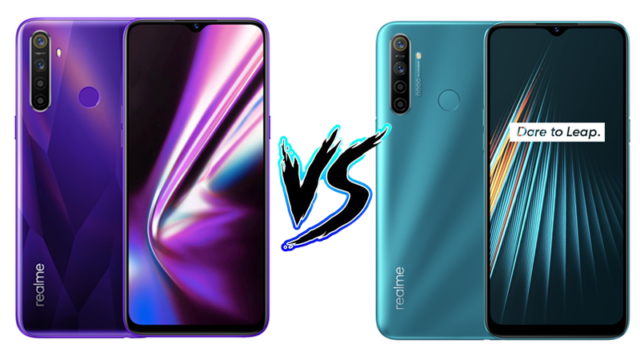 Realme has continuously been launching new devices to keep up with the latest market trends. It lately unveiled the all-new Realme 5i succeeding the last year’s Realme 3i (review); following which, we now have a total of four smartphones in the Realme 5-series.

Now, the phone itself is based on the previously launched Realme 5s and is very similar in terms of specifications. That said, it does have some noticeable differences on offer. In this article, let’s have a look at Realme 5s vs Realme 5i comparison, primarily focussing on the differences between both the devices.

Realme 5s vs Realme 5i: The Differences!

The Realme 5s and Realme 5i are very similar in terms of design. In fact, they look exactly the same from the front, with a water-drop notch and a small chin at the bottom; even the rear camera placement has remained unchanged.

What has changed is the back panel, which now gets a new Sunrise pattern, compared to the diamond-cut finish on the Realme 5s. Moreover, the Realme 5i comes in fresh Aqua Blue and Forest Green colours while the latter is available in Crystal Blue, Crystal Purple, and Crystal Red options.

As far as the rear cameras are concerned, Realme has given quad-camera setups on both the phones comprising an 8-megapixel wide-angle camera and dual 2-megapixel macro and portrait units.

The Realme 5i also faces a downgrade in terms of the front camera, which is now an 8-megapixel f/2.0 shooter compared to the 13-megapixel selfie camera on the Realme 5s. More resolution does give the 5s an edge over the former in the camera department.

In addition to the differences mentioned above, all the other specifications remain the same on both the devices. For starters, the duo gets a 6.5-inch IPS display with an HD+ (720 x 1600 pixels) resolution, followed by Corning Gorilla Glass 3+ protection on top and splash resistance.

Under the hood, the devices get powered by octa-core Qualcomm Snapdragon 665 AIE SoC, coupled with Adreno 610 GPU. And then there’s a massive 5,000mAh battery that supports standard 10W charging.

Other specifications include connectivity options like 4G VoLTE, Wi-Fi 802.11ac, Bluetooth v5.0, a GPS/ A-GPS, a 3.5mm headphone jack, and a Micro-USB port. Furthermore, there’s a fingerprint sensor at the rear, followed by an accelerometer, proximity, ambient light, gyroscope, and compass sensors under the hood.

Realme 5s vs Realme 5i: Conclusion

As evident, the Realme 5s and Realme 5i aren’t very different from each other. However, there’s no denying the fact that the 5i is more of a replacement to the Realme 5 and loses the ground to Realme 5s when it comes to the camera department. Then again, it undercuts the latter by a decent margin and has fresher colours on offer.

In the end, it all boils down to your budget and priorities. If you have a tight budget, the Realme 5i will be an excellent choice at Rs. 8,999. However, if you can spend a thousand rupees more, the Realme 5s will give you better front and rear camera performance.