Realme lately launched an incremental upgrade to its popular Realme 5 (review), dubbed as Realme 5s in India. Just like the case, it was with Realme 3i, the company has tried rectifying certain things with the new iteration while adding some new features to withstand the competition.

Note that there aren’t many significant changes between both the phones- the reason we called it an ‘incremental’ upgrade. Nevertheless, in this article, let’s have a look at the evident differences between Realme 5 and Realme 5s.

Realme 5 vs Realme 5s- The Differences! 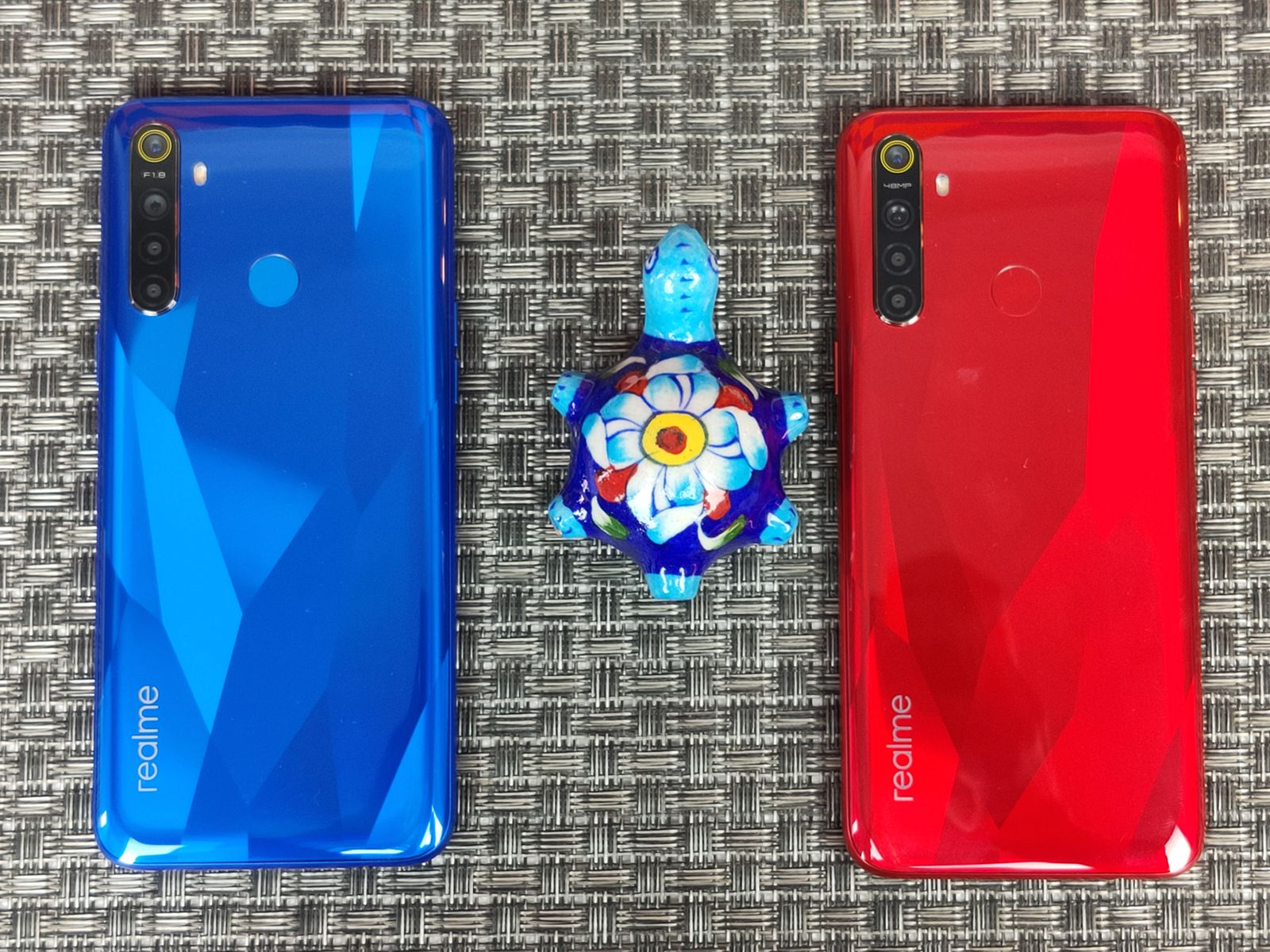 The Realme 5 came with a polycarbonate body and a crystalline pattern at the back, available in Blue and Purple options. And while the Realme 5s retains the same design language, it gets a whole new Crystal Red colour option which shifts between several hues of red on reflection if light. 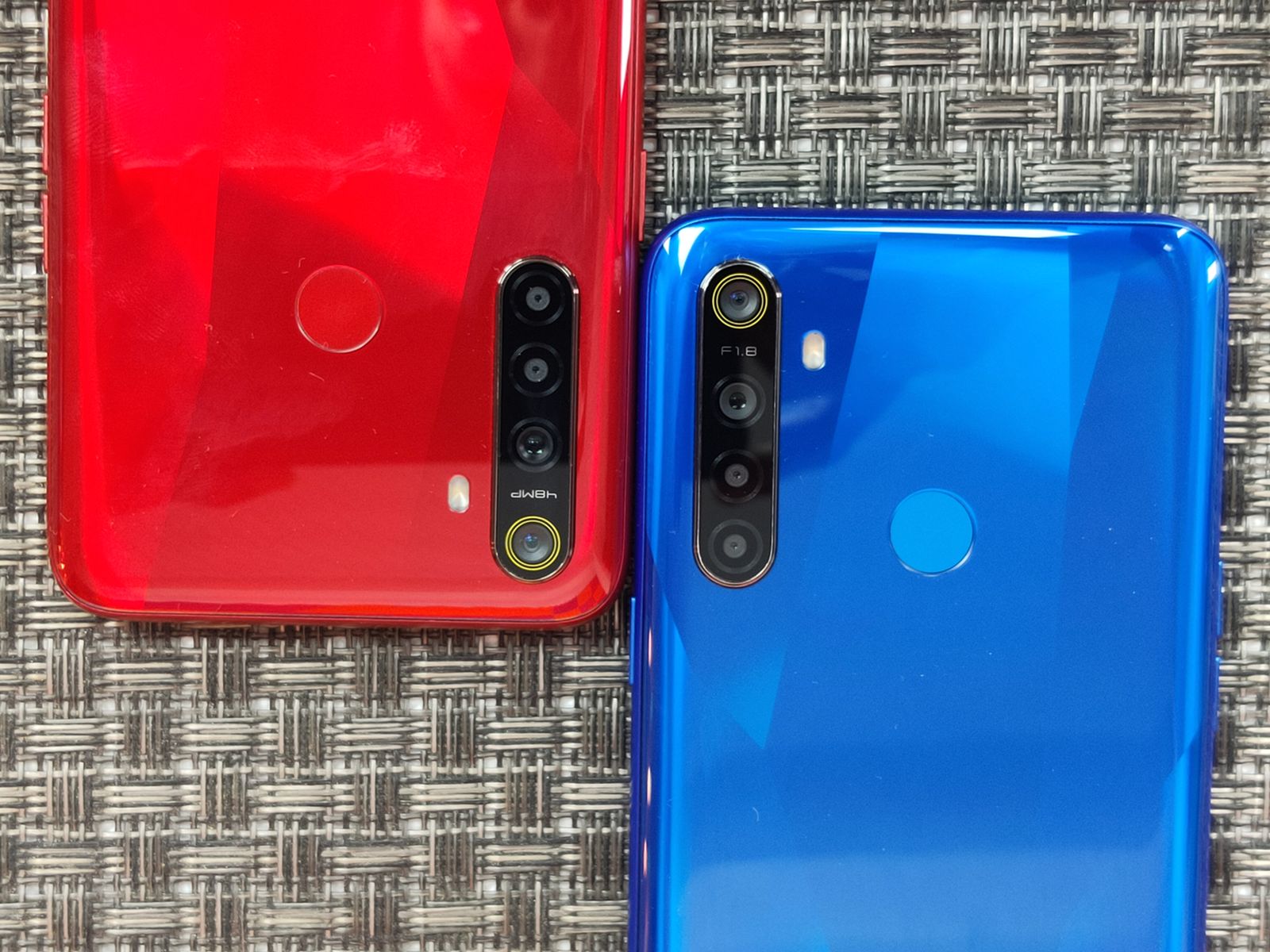 One of the biggest and perhaps the only major difference between both devices is their rear camera. For starters, the Realme 5 came with a 12-megapixel primary shooter with f/1.8 aperture. This was accompanied by an 8-megapixel wide-angle shooter with 119-degree field of view, a 2-megapixel macro lens with an f/2.4 aperture, and a 2-megapixel depth camera. 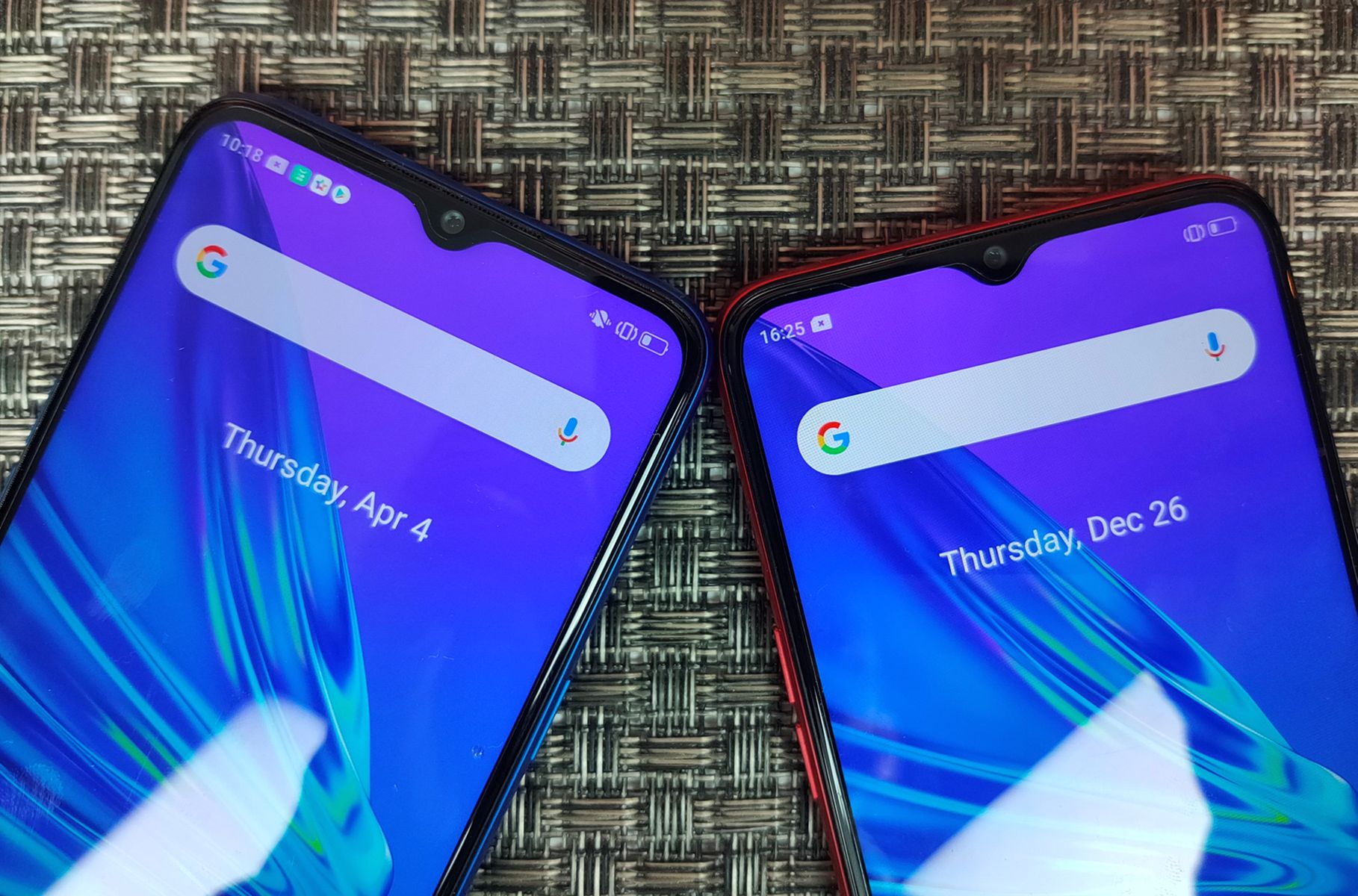 The Realme 5s, on the other hand, gets a 48-megapixel Samsung ISOCELL Bright GM1 sensor with an f/1.8 aperture as its primary shooter. The other three units stay the same, followed by the 13-megapixel selfie camera which remains unchanged from the regular version. 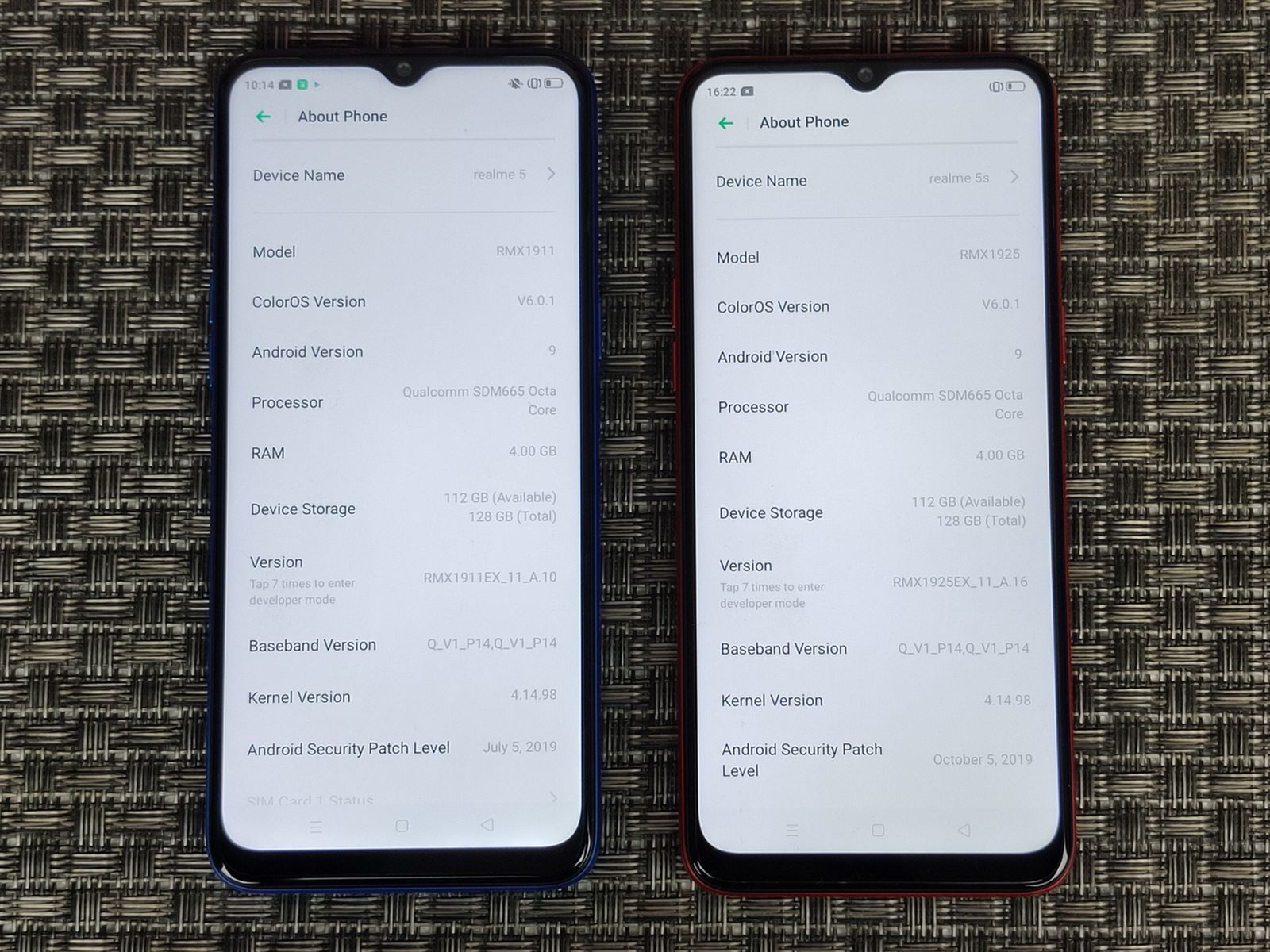 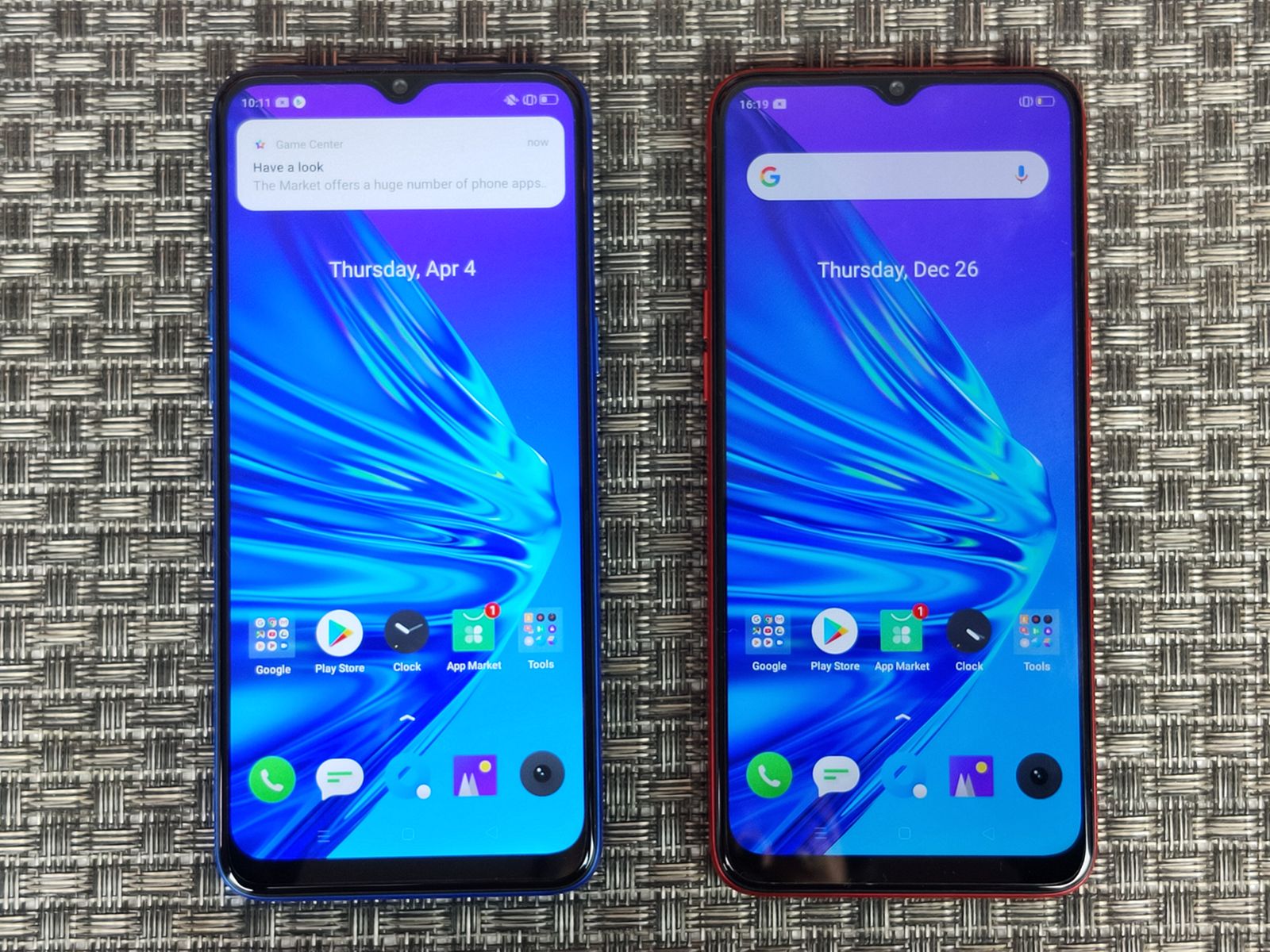 Apart from the differences mentioned above, all the other specifications are exactly the same on both the devices. Both the phones feature a 6.5-inch IPS display with HD+ resolution of 720 x 1600 pixels. Plus, they also get Corning Gorilla Glass 3+ protection on top and come with splash resistance.

Under the hood, the Realme 5-duo gets powered by octa-core Qualcomm Snapdragon 665 AIE SoC, coupled with Adreno 610 GPU. Then there’s a massive 5,000mAh battery, backed by standard 10W charging.

Other specifications include support for 4G VoLTE, Wi-Fi 802.11ac, Bluetooth v5.0, a GPS/ A-GPS, a 3.5mm headphone jack, and a Micro-USB port. There’s a fingerprint scanner at the rear, followed by an accelerometer, proximity, ambient light, gyroscope, and compass sensors. And since there’s no change in the build, both of them measure 164.4 x 75.6 x 9.3mm and weigh 198 grams.

Realme 5 vs Realme 5s – Wrapping Up 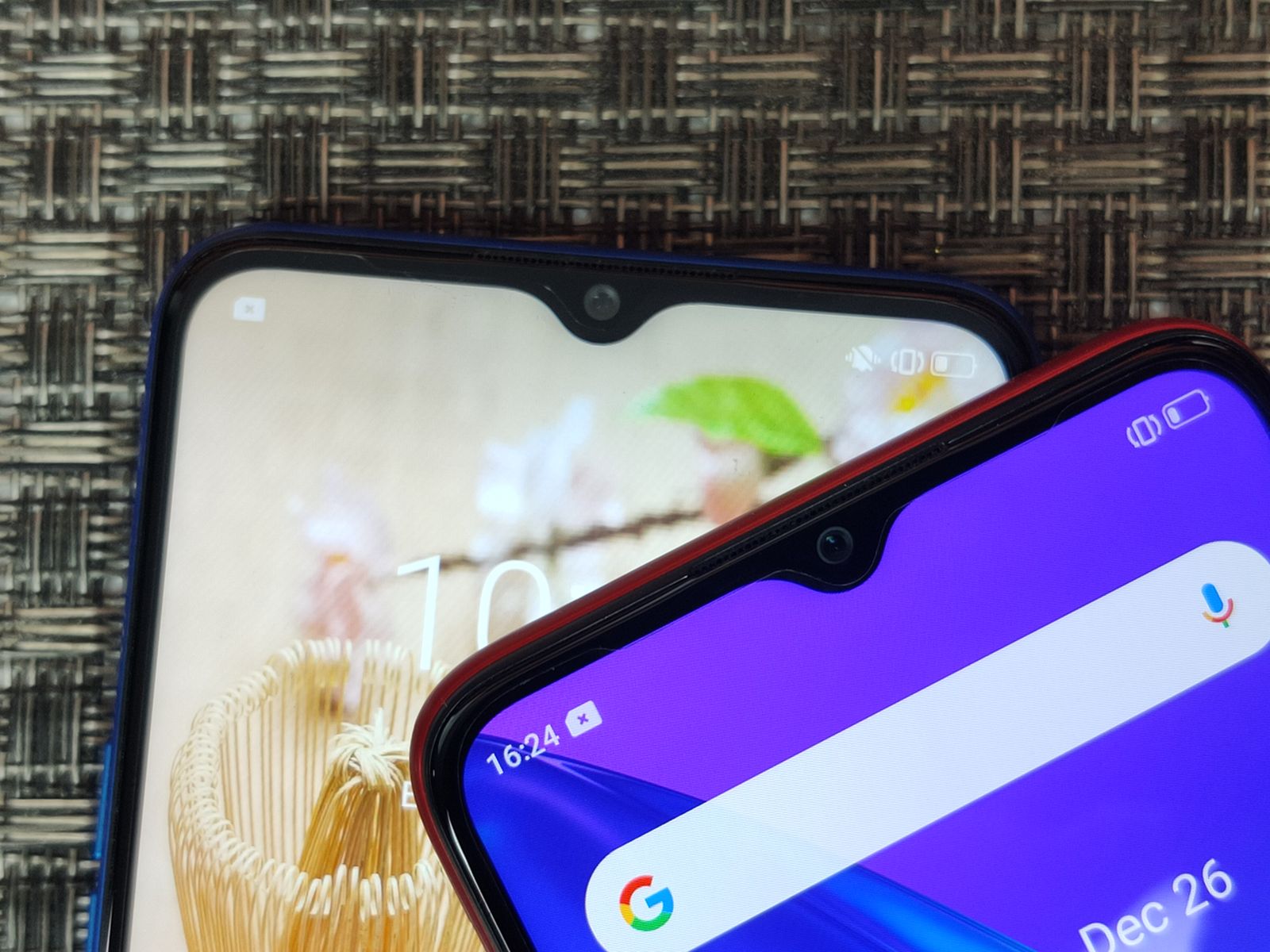 Evidently, the Realme 5s bears the same price as its predecessor but comes with a whole new paint job, and a better primary rear camera. Unfortunately, the company has completely skipped the 3/32GB model this time.

Overall, while it’s one of the good options to buy under Rs. 10,000, we’d have loved to see a full-HD+ display and USB Type-C at this price point. Support for fast charging too would’ve been a welcome change to compete with devices like Redmi Note 8 (review) and Vivo U20.

Apple might launch iPhone SE2 at an event on March 31, market debut on April 3