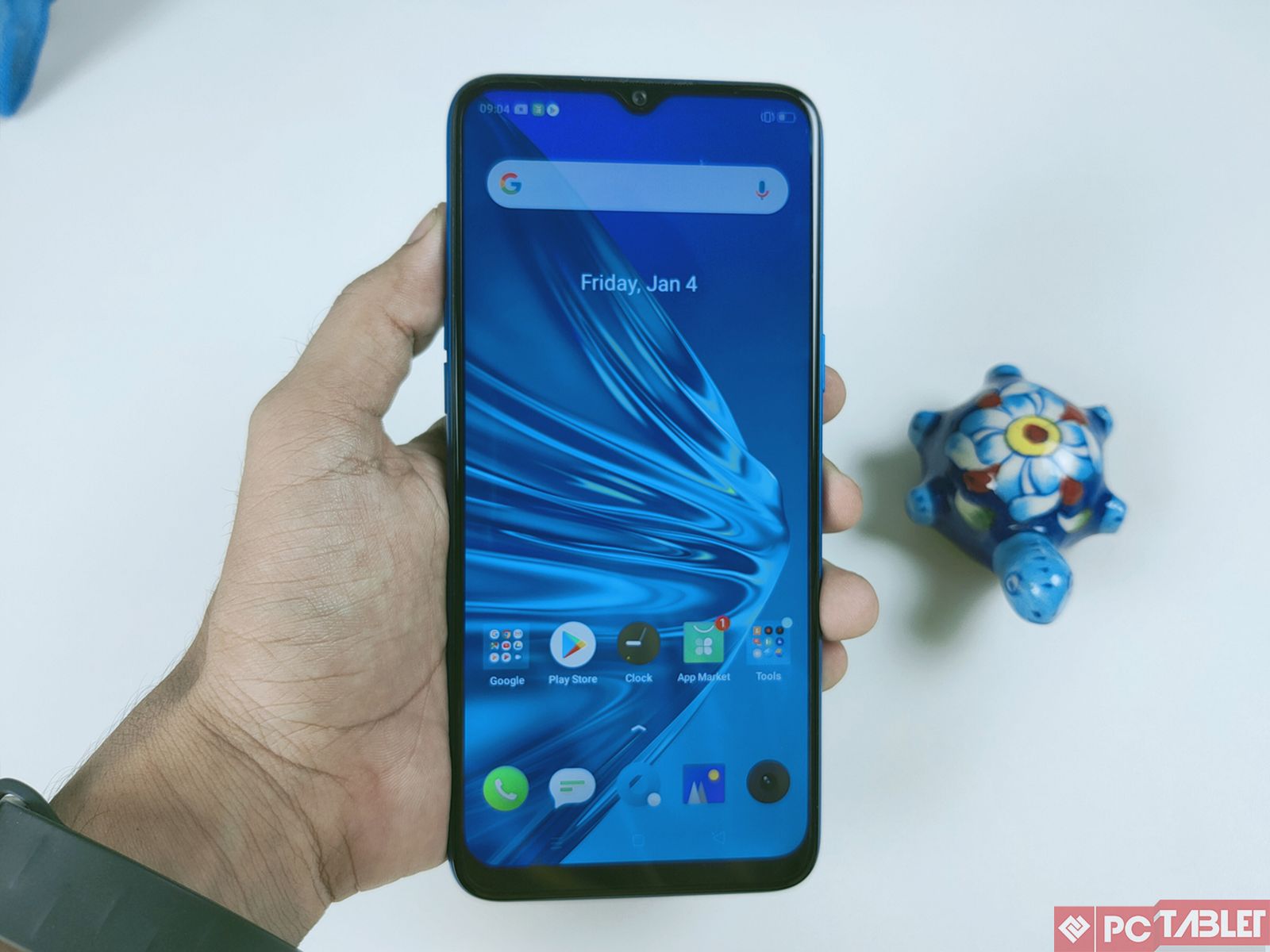 Realme has had a long time competing with Xiaomi over its dominance in the Indian market. And churning out some of the best-sellers like Realme 3 and 3 Pro, the company has indeed managed to succeed commendably in the budget segment.

Now, being the brand’s latest offering in the sub-10K division, the Realme 5 touts a massive 5,000mAh battery and a total of four lenses at the rear as its major highlights. Assuredly, that seems very compelling at least on paper, right?

Well, we’ve spent a couple of days with the device, and here’s all that you need to know before buying this product.

Before starting with the Realme 5 review, let’s have a glance at the phone’s specifications, pricing and things we get with the device.

While the Realme 5 retains the polycarbonate body with a laminated plastic back from the Realme 3, it gets a different design altogether. The back, instead of a plain gradient finish, gets a peculiar crystalline pattern, inspired by the diamond-cut pattern on Realme C2 and Realme 3i. Now that looks quite neat and offers it a premium appeal to the device.

The front, on the other hand, stays more or less similar, with a 30% smaller water-drop notch on top and a significant chin at the bottom.

For starters, the device is available in two colour options- Crystalline Blue and Crystalline Purple. The former we have here gets a subtle blue hue that flushes in well with the pattern. Whereas, the Purple variant touts a darker purple shade which looks a tad more flashy and unique at the same time.

Just like most phones with polycarbonate back, the glossy panel on the Realme 5 is a fingerprint magnet and prone to scratches. With the extensive usage of around a week, which involved keeping it in the pocket with my bike keys, and playing it around without any case, I did end up getting some minor scuffs around the back. So, if you find yourself using it carelessly, mind picking up the purple variant as usage signs are going to be less visible on it.

Note that the Realme 5 is a bigger and bulkier device altogether, due to the larger display and huge battery. And this indeed makes it quite uncomfortable for single-hand use, especially for people having small hands. Needless to say, the phone feels quite heavy at nearly 200grams, hindering extended hours of use.

Talking of button and port placements, we’ve got segregated volume rockers to the left and power button to the right. There’s also a dedicated triple slot to the side, followed by a single speaker, 3.5mm audio jack, and MicroUSB charging port at the bottom. There’s a vertically stacked pair of quad-cameras at the top left on rear, followed by a fingerprint scanner and Realme branding at the bottom.

In comparison to its predecessor, the Realme 5 touts a 6.5-inch IPS LCD display with an HD+ resolution of 720 x 1600 pixels- a larger screen with the same resolution, meaning lesser pixels on offer. Well, this does hamper the overall sharpness of the screen, especially for pixel-peepers like me.

Anyways, the display is contrasty, has great viewing angles and offers punchy colours. The brightness levels are quite good as well, and we had no issues while using the phone outdoors. Unfortunately, there’s no Widevine L1 support on offer, meaning you can’t stream HD content on services like Netflix and Amazon Prime Video.

Powering the phone at its core is the new Qualcomm Snapdragon 665 AIE SoC, coupled with up to 4GB of RAM and 128GB of storage. Note that this is the same processor used by the Xiaomi Mi A3 (review), which costs around Rs. 3,000 more, counting in the 4/64GB models.

Now, the Snapdragon 665 isn’t a performance-oriented processor. Instead, it’s more inclined towards power efficiency. Day to day use, including browsing the web, watching videos and surfing social media felt snappy and smooth. However, the phone does get sluggish at times due to the heavily skinned software on offer.

As for gaming, we tried playing PUBG Mobile and Call of Duty in medium graphics settings and the games ran quite smooth without any issues whatsoever. Anyways, the device is simply not made for hardcore gaming, and we’ll recommend the 4GB RAM model if you’re into heavy multitasking.

Like other Realme devices, the Realme 5 runs ColorOS based on Android 9 Pie. And this is indeed one of the most controversial factors of the handset. The UI is a heavily skinned and modified version of Android, which, despite being optimised well, doesn’t offer the same responsiveness as stock Android.

With the latest ColorOS 6, you now get an App drawer which can be revealed by a simple swipe on the home screen. Furthermore, you get to choose between Pixel-styled pill gestures or the new full-screen gestures for a more immersive experience. The UI also includes several motion and screen gestures to play around.

There’s also an excellent file sharing feature dubbed as Realme Share, which is quite similar to Apple’s AirDrop. Plus, there are a couple of other handy features like Smart Driving, Smart Assistant, Game Space, Clone Apps, Private Safe and more. Note that there’s a fairly good amount of bloatware on offer such as DailyHunt, Opera, UC Browser, ShareChat, Web novel, etc. which, fortunately, can be uninstalled in the settings.

Evidently, the UI is quite heavy on resources. Hence, if you’re someone like me who loves stock Android, then you’re going to have a hard time getting used to the ColorOS.

Cameras are certainly one of the main selling points of the device. There are a total of four cameras at the rear, comprising of a 12-megapixel primary sensor with f/1.8 aperture, an 8-megapixel ultra-wide angle shooter with f/2.2 aperture, and two 2-megapixel macro and depth sensors. For selfies, it has the exact same 13-megapixel f/2.0 unit from the Realme 3.

In daylight, the primary camera shoots decently sharp images with the right amount of detail and contrast on offer. Colours are accurate, and the dynamic range is quite wide as well. However, you may find noise and lack of detail on zooming in. Besides, low-light photography is pretty average with soft and noisy images. Nightscape mode does help in boosting the level of detail and dynamic range, though.

The wide-angle camera, on the other hand, produces just passable results which aren’t as good as the primary unit for obvious reasons. One can use the macro lens by switching to the ‘Ultra macro’ mode, which yields some stunning closeups with crisp details which are simply not possible with the regular lens. Portrait mode works very well and gets you a natural-looking blur. However, edge detection takes a hit at times.

As far as the front camera is concerned, it produces excellent results in ideal lighting and the pictures are good enough for a direct share on social media. But then again, things start to deteriorate in darker environments.

As mentioned, the Realme 5 comes with a very efficient Snapdragon 665 processor. This, when coupled with a massive 5,000mAh battery, makes it feel even bigger and better. Even with a medium to heavy usage, one can easily stretch for two-day battery life.

Unfortunately, the device lacks any sort of fast charging. And the provided 10W charger takes ages to charge that mammoth battery, around 2.5 hours to be precise.

Amongst other things, both the fingerprint scanner and face unlock work reliably well. Plus, the audio output from the bottom speaker and the headphone jack is perfect in the segment. Network reception too is very impressive, and we’ve had no issues while calling and browsing the web even on dual 4G VoLTE.

Realme 5 Review Verdict- Should you buy it?

For a starting price of Rs. 8,999, Realme 5 turns out to be a fantastic value for money offering from the company. You get a versatile set of cameras, satisfactory performance, modern design and of course a huge battery, making it one of the best choices under Rs. 10,000. In all, you’re someone who loves clicking pictures, prioritises battery life and can compromise on weight, UI and fast charging, then Realme 5 is undoubtedly the phone you should go for.

However, if you’re willing to have something more, there are a lot of amazing phones in the segment that offers better displays, similar or better performance and fast charging at a slightly higher price point.