The online publishing industry has seen a boom in the recent times. Users today have access to a plethora of websites and blogs right from Indian like BGR, Reuters, our own PC-Tablet, and more to international tech portals like The Verge, Engadget, TechCrunch etc. It’s not just tech blogs you can access to get the latest updates, but there are many such blogs serving you with the latest information on entertainment, sports, politics, and that too for FREE.

Ok, if you are thinking that having access to the data online at no cost is your birthright, then Sorry it is not! The ads appearing on your web page is what that makes the content free. Publishers fetch revenue from the ads, which in turn allow you to read numerous blogs without having to pay for it. If ads are removed from the website using ad blockers, publishers won’t have business, and they have to charge you some amount for their survival. This will result into no more free content for the end users.

There are many ad blockers available on the internet for free that restricts ads to appear on the web page e.g. AdBlock, Purify, Crystal, 1Blocker, and ABP. Web browser Opera also supports ad blocking with the use of inbuilt adblocker. Once installed, the browser restricts ads on the page; thereby putting a plug on the publisher’s business. We completely condemn the use of such browsers and ad blockers.

What does these Ad blockers do and Why we condemn them?

The ad blockers simply block all the scripts with keywords such as ads, AdSense, and such. As the scripts are filtered, these ads are forced to hide in the background. The ad blocking is categorized into two types one is Communication blocking, and the other is content hiding. Communication blocking is where communication to ad resources are blocked e.g. URLs including google.adsense. The content hiding is where HTML elements are hidden in the background.

Big media houses like Forbes and others have already started using the policy of paid subscription if users want to enjoy an ad-free experience on their websites. As soon as a user with adblocker installed enters the website, a message in block letters appears, which request the users to turn off the ad blocker or pay a subscription fee to access the content.

How is it affecting Digital Publishers? What’s at stake for Consumers

As per a survey by Interactive Advertising Bureau, online advertising industry earned a total of $49.5 billion in 2014. Another report by PageFair and Adobe estimates advertisers have to face a revenue loss of $22 billion in 2015 because of the ad blocking software, 40 percent more than in 2014.

According to an article by TheWindowsClub.com, gaming and tech niche publishers are the most hit by the Ad Blockers. 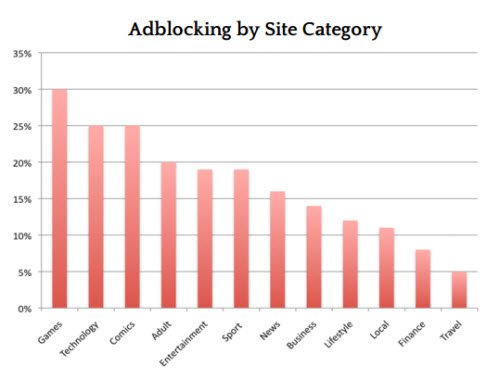 If the figures turn out to be true, it would hit hard on the small publishers and startups that are trying to make a mark in the industry. Startups are highly dependent on revenue on their existence, and if the ad blockers are excessively used, it would be an unnecessary burden on the publishers to care for their revenue instead of content quality. In that case, consumers have to do with the sub-standard content quality as well as pay for the subscription fee.

To say it in simple words, no pain, no gain. Everything comes at a cost. And if you are getting it free, you have to bear the ads.