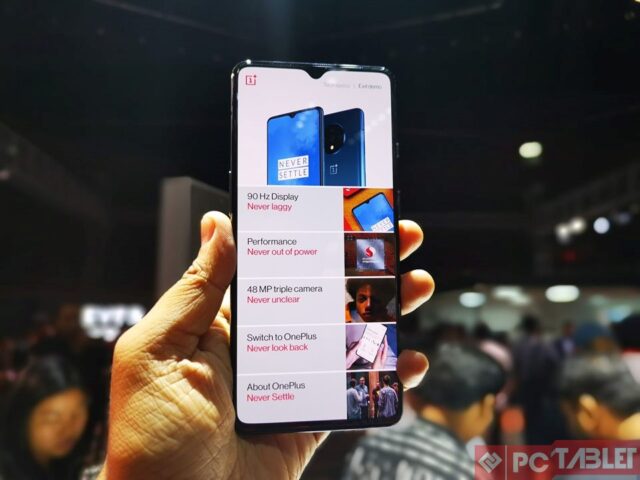 Commenting on the launch, Pete Lau, Founder and CEO of OnePlus, said: “OnePlus always strives to deliver the best technology and ‘fast and smooth’ experience possible to its users.” “The OnePlus 7T is a combination of style and substance, with industry-leading technology including the super smooth 90 Hz display, and new triple-camera set-up, and unmatched user experience,” he added.

The OnePlus 7T sports a revamped back design with the circular camera module and comes in glacier blue and frosted silver colour options. As for the specs, it features a 6.55-inch fluid AMOLED display with a 90Hz refresh rate, 20:9 aspect ratio and water-drop notch on top. Furthermore, the panel boasts support for HDR10+ and a new feature called Chromatic Reading Mode for the enhanced reading experience.

Under the hood, the phone gets powered by the top-of-the-line Qualcomm Snapdragon 855+ SoC, coupled with 8GB of RAM. It’ll be available in 128GB and 256GB UFS 3.0 storage variants.

For photography, the 7T boasts of a triple camera setup at the rear. This comprises of a 48-megapixel Sony IMX586 sensor with f/1.6 aperture and OIS, followed by a 16-megapixel ultra-wide-angle camera, and a telephoto lens for 2x optical zoom. For selfies, there’s a 16-megapixel front camera housed in the waterdrop notch. The phone now supports Nightscape mode on both the regular and wide-angle lenses.

On the software front, the device runs Oxygen OS based on latest Android 10. Moreover, it packs a larger 3,800mAh battery and supports 30W Warp Charge 30T. Amongst other features, the OnePlus 7T gets Dolby Atmos, Zen Mode and a new Macro mode in the camera that allows capturing objects as close as 2.5cm.

Both the OnePlus TV Q1 and Q1 Pro tout a 55-inch QLED panel with 4K resolution. The panel supports a colour range of NTSC 120%, followed by Dolby Vision, and HDR10+. The OnePlus TV also houses a powerful Gamma Color Magic chipset to help with picture processing and rendering.

On the software front, they run on the Android TV platform based on Android Pie with company’s own skin dubbed as Oxygen Play. There’s support for Google Assistant and Alexa smart speakers. And OnePlus users can also use their OnePlus smartphone to control the TV using the OnePlus Connect feature.

The OnePlus TV Q1 Pro, being expensive of the two, gets a motorised soundbar that extends outward from the TV. The total sound output measures 50W with two backwards-facing and six forward-facing speakers.

Customers will be able to purchase the OnePlus 7T and experience the new OnePlus TV at the exclusive pop-ups in Bangalore, Delhi, Mumbai, Hyderabad, Chennai, Pune, Kolkata and Ahmedabad starting at 2:00 pm, exclusively on 27th September 2019.