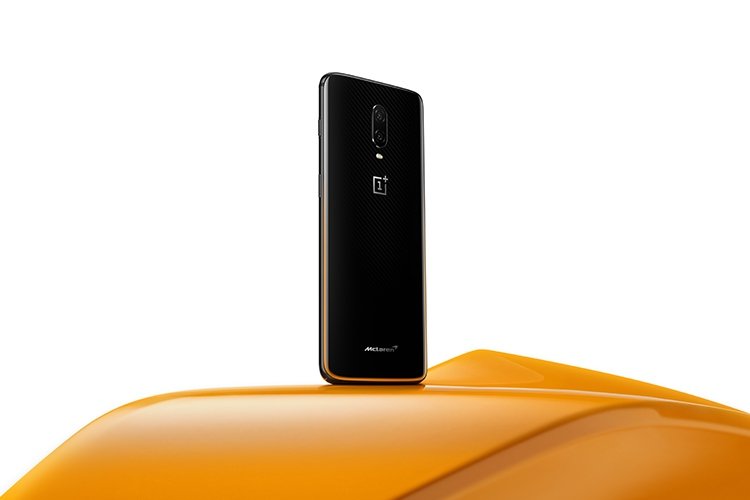 A day after the global unveil, the Chinese smartphone giant OnePlus has now launched the OnePlus 6T McLaren Edition in India, today, at an event held in Mumbai.

The OnePlus 6T McLaren Edition is a limited special edition of the company’s current flagship. As the name suggests, it is crafted in partnership with the famous British car-maker McLaren.

Apart from the whopping 10GB of RAM, the smartphone brings in a partial design overhaul. Nonetheless, it also debuts the all-new Warp Charge 30 technology. This new charging protocol will be replacing Dash Charge in all future OnePlus smartphones.

The OnePlus 6T McLaren Edition Speed Orange (that’s what they call it) gets a shiny back panel with a pattern based on McLaren’s carbon fibre technology. McLaren has been using this pattern on all of its cars since 1981, says the company.

Following the same, the car maker’s signature Papaya Orange colour wraps around the bottom edge of the device and melts gradually into the black. The OnePlus logo is placed just below the rear camera module, while the McLaren branding can be seen at the bottom. In fact, the given wall adapter and braided charging cable too bear yellowish-orange accents.

As for the specs, most of the things stay the same as regular OnePlus 6T. The OnePlus 6T McLaren Editon sports a 6.4-inch Full HD+ AMOLED display with a waterdrop notch at the top. The screen further touts a 19:5:9 aspect ratio and Corning Gorilla Glass 6 protection.

Under the hood, the device gets powered by the Qualcomm Snapdragon 845 SoC, coupled with Adreno 640GPU. It’ll be available in a single variant with 10GB of LPDDR4X RAM and 256GB of internal storage.

On the software, the handset runs Oxygen OS based on latest Android 9.0 Pie. The in-built 3,700mAh battery keeps things ticking while the new Warp Charge technology (using a 30W adapter) claims to provide a day’s juice with a mere 20 minutes of charging.

For unlocking the phone, we have the In-display fingerprint scanner, dubbed as Screen Unlock in addition to the Face Unlock. Connectivity options and sensors remain the same as on the regular model.

The OnePlus 6T McLaren Edition price in India has been set at Rs. 50,999 for the sole 10/256GB RAM and storage variant. The device will be sold exclusively via Amazon.in with the sales starting from Dec 15. It’ll also go on sale at OnePlus Experience Store in Connaught Place, New Delhi, on Dec 13 (inauguration day).