OnePlus is preparing to release a soft gold colour variant of the OnePlus 3 soon. The company has put out an image of the OnePlus 3 Gold colour option on the Chinese microblogging website Weibo, and it is expected to launch in July.

Since its launch last month, the OnePlus 3 was only sold in a graphite coloured variant. A few weeks ago, Carl Pei, the co-founder of OnePlus revealed on Twitter that the smartphone would also feature a soft gold coloured variant in the month of July. So, we expect that the company will soon start selling the new variant.

The company claims that the soft gold colour is inspired from the gold tones found in classical Japanese arts. The latest variant will sport the same fine-grained sandblasted feeling and natural metallic finish as the graphite version. 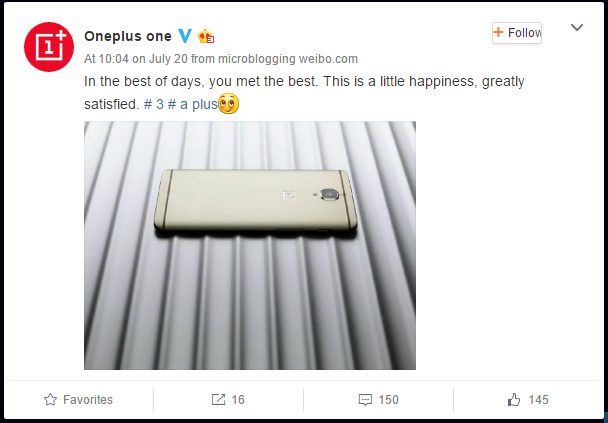 The smartphone comes with 5.5-inch Optic AMOLED display with 1080P Full HD resolution and covered by Corning Gorilla Glass 4. The OnePlus 3 is powered by the Snapdragon 820 processor with four Kyro cores, two being clocked at 2.15 GHz each and the other two at 1.6 GHz each, combined with Adreno 530 GPU. There is 6 GB of LPDDR4 RAM along with 64 GB of inbuilt storage capacity. The phone runs on the custom made Oxygen OS on top of Android 6.0.1 Marshmallow.

The smartphone comes with 802.11 ac Wi-Fi, Bluetooth v4.2 (LE), USB Type-C, fingerprint reader, and barometer. There is a 3000mAH battery to juice up the handset.