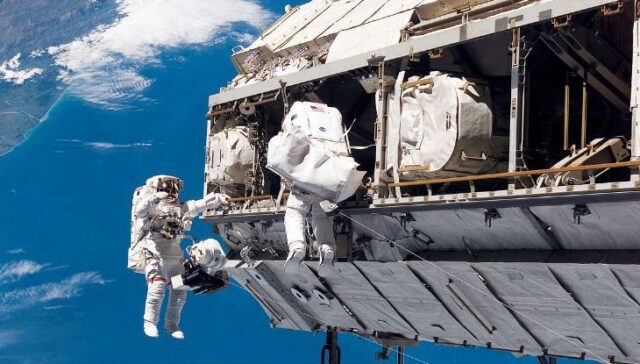 NASA has revealed an amazing video footage of spacewalking astronauts on their daily operations at the International Space Station (ISS). The video exposes the events that take place when the astronauts are out of the orbiting spacecraft.

The latest footage from the ISS is very appealing that one can forget they are more than 250 miles away from the Earth surface. The video recording illustrates two astronauts carrying out their usual tasks outside their spacecraft. The footage also displays an outlook of the Earth Planet from an elevation of 250 miles above.

In the spacewalk, ESA’s Thomas Pesquet and Shane Kimbrough from NASA team organized a Pressurized Mating Adapter3 (PMA-3) robotic shift that would facilitate the commercial crew automobiles to dock in the space. The docking adapter will be distributed by SpaceX Dragon space cargo vessel soon.

The spacewalk event is the second record for Pesquet, while Kimbrough has done it five times and has always found it more pleasurable and hilarious to go out of the orbiting lab. Peggy Whitson has recorded her eighth spacewalk landmark, the highest mark ever performed by a woman astronaut. Last month, Whitson made the headlines in the news when she broke the record as the first woman to ever stay the longest time in Space.

The spacewalks are however not without challenges. Many spacewalkers have failed terribly in their missions forcing them to sometimes carry out unplanned actions to save the situation. For instance, the recent video revealed the spacewalkers losing an essential protecting gear required by the ISS forcing them to do an impromptu battle as the cloth bag drifted away in the space.

Statistics show that Spacewalkers have continuously lost important items in the past. For example, during the spacewalking moment that occurred in 2008, the astronauts lost a whole toolkit which easily slipped through them into space.

However, the small mishaps have never deterred the efforts of the dedicated team of astronauts. They are always ready to amend the necessary changes that would make them continue pursuing their mission.