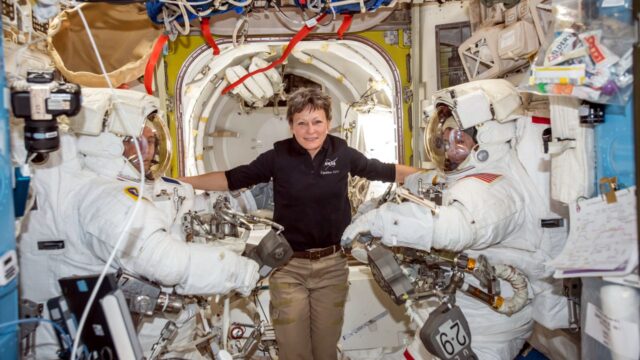 The NASA astronaut, Peggy Whitson, has scheduled to talk to her audience in one of the highest resolution video broadcast live from the space. The US astronaut recently broke the record for cumulative time spent in the space, an occasion that was celebrated and distinguished by President Donald Trump, the First Daughter Ivanka Trump, and the fellow colleague astronaut Kate Rubins who called and congratulated the astronaut.

Whitson, the current commander of Expedition 51 will at exactly 1:30 p.m. Indian times, today take the viewers about 250 miles away from the Earth to the International Space Station (ISS) in the first and one of its kind, the 4K video, live from the space. During the incidence, Whitson will converse with Sam Blackman, the Chief Executive Officer and Cofounder of AWS Elemental, through a ultra-high-definition (UHD) broadcast which will be transmitted in the 4K from the 2017 National Association of Broadcasters Show in Las Vegas, U.S.

According to president Trump, Peggy Whitson is a phenomenal and distinctive role model for the young American women who want to explore the world in the STEM education programs and careers. Whitson has set her own standards and enlisted the full potential women can have in the modern society. The U.S. president promised to support and ensures that the American women have the right to entry to STEM education and careers to make certain the America as a whole continues to benefit from trailblazers women such as Peggy Whitson.

According to NASA, the advanced technologies on the International Space Station through the dedicated members such as Whitson and her crew team will further help us to understand the solar system and identify other places to stay longer as they explore the deep world space.