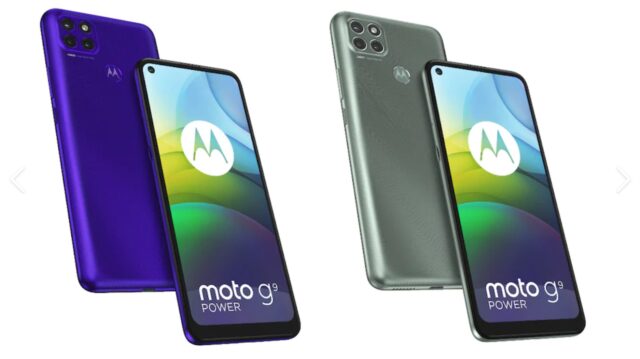 Budget mid-range phone buyers in India have been provided yet another option in the form of the new Motorola Moto G9 Power. Priced at just Rs. 11,999, the new Moto G9 Power comes with impressive specs such as a large 6000 mAh battery, 64 MP rear cam, Snapdragon 662 for the processor along with IP52 certification for protection from water and dust.

The front is dominated by a 6.8-inch HD+ IPS display that is lit up by 720 x 1640 pixels. The display comes with a punch hole along the top left and has a 20.5:9 aspect ratio. On the other side of it lies a Snapdragon 662 chipset that is paired with 4 GB RAM and 64 GB of native storage. The latter again can be expanded to 512 GB via microSD cards.

For optics, the phone comes with a triple-lens arrangement. That comprises of a 64 MP primary camera having f/1.79 aperture and is backed by Quad Pixel technology. Then there is a pair of two 2 MP cameras, each being of f/2.4 aperture and serves as a depth sensor and macro shooter, respectively. The front gets a 16 MP selfie shooter.

Another unique feature of the Moto G9 Power is its IP52 certification for water and dust ingress. This makes it a standout feature among its competitors in this price range. The rear, meanwhile, also features a fingerprint sensor as well. For software, the phone runs a near stock version of Android 10 right out of the box.

Connectivity options you have with the phone include 4G LTE, Wi-Fi 802.11ac, Bluetooth v5.0, GPS/ A-GPS, and NFC. Then there is a headphone jack as well, as is a USB Type-C port that allows for faster data syncing and recharges. To elaborate on the latter, the phone supports 20W fast charging to replenish the massive 6000 mAh batteries on board.

The phone is all set to go on sale in India starting December 15, from 12:00 noon onwards on Flipkart. The phone is going to be available in shades of Electric Violet and Metallic Sage.