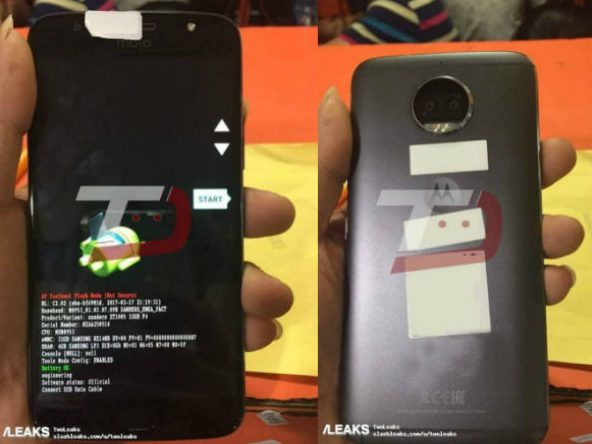 Two live images of Moto G5S Plus have surfaced online. The leaked images show the back of the handset which is slightly covered with a piece of a sticker. However, the previous rumors from a seasoned smartphone leaker Evan Blass state that device will sport a 1080p display, Snapdragon 625, 4GB RAM, and 64 ROM.

Furthermore, the Blass also indicates that device is expected to come with an Aluminium rear panel, 8MP front shooter and 13MP dual camera set up which will be a combination of RGB and Monochrome sensors. The camera setup would be capable of delivering features like bokeh effect, background replacement, and selective black-and-white filtering. This will let users get more experimental and creative with their photos.

Specs and images show that the handset would probably get a significant upgrade as compared to the previous generation variant. The handset could be revealed along with Moto Z2 Force and Moto X4 by the company in the New York event which is going to be held on the 25th of July.

The Moto G5S Plus is expected to be a good mid range contender with a premium built quality from Motorola.  The company is looking forward to producing low-cost devices with a premium build and excellent hardware configuration to cater the all market segment, as the numbers of rivals have increased to a greater extent and the market has become very much saturated.