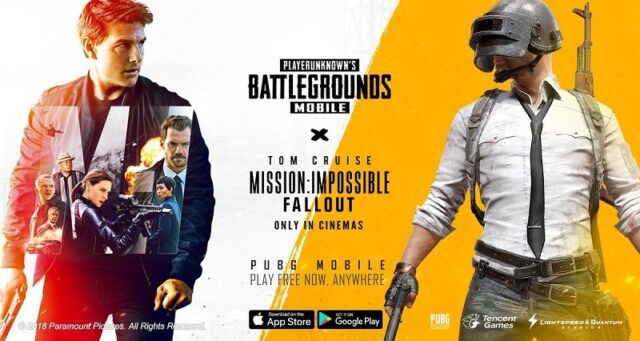 As expected, the new update brings new in-game content inspired by the movie. For instance, players can listen to Mission Impossible background score, get special rewards such as new outfits customizable parachutes, as well as several movie-themed add ons.

“Nothing is impossible for PUBG Mobile, the world’s most popular mobile battle royale game – not even a partnership with an iconic movie franchise such as Mission: Impossible. After only a few months on the market, we continue to build our player base for PUBG Mobile – now over 100 million strong – while growing our brand with innovative partnerships such as this special in-game event to appeal to a broad range of gamers worldwide,” said PUBG Mobile team General Manager Vincent Wang.

You can find the complete patch notes below:

PUBG Mobile was released on March 19 for iOS and Android. Since the game’s launch, it has become one of the most popular mobile games commanding a strong user base of over 100 million players. Reports suggest it has made over $430 million in revenue since its release. The introduction of Royale Pass, which brings new content and challenges has further bolstered the game’s popularity, bringing 3x more revenue to the game. The game is even more popular in Asian markets, with US accounting for only 30 percent of the game’s revenue.

Are you excited about the new Mission Impossible event in PUBG Mobile? Do let us know in the comments below.