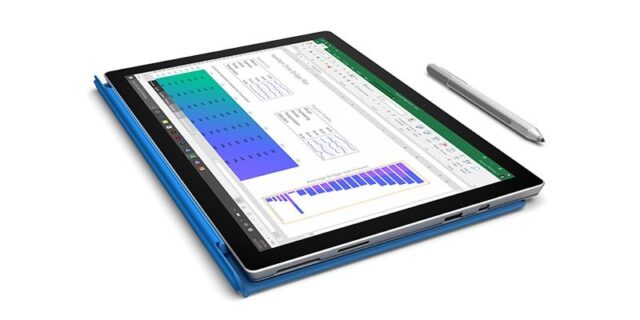 Microsoft Surface Pro 5 is expected to launch alongside the new Surface Book 2 in early 2017, most likely when Windows 10 Creators Update rolls out in April. The Redmond-giant has been rather tight-lipped about its upcoming hardware, though sources familiar with the matter now suggest that the Surface Pro 5 is indeed in the works.

WalkingCat cites a Microsoft employee who apparently posted Surface Pro 5 details in his LinkedIn profile. Product Designer 2 at Microsoft, Toby Fitch, revealed in his profile that he was part of the Analog Speech Design Team, an R&D team which focuses on new speech models with multidisciplinary design approach for upcoming devices not limited to HoloLens, Surface Pro 5, or the Xbox.

For now, there’s not much information about the rumored Surface Pro 5. That said, it’s safe to assume that the upcoming model is likely to get an upgrade, most likely with the latest IntelKaby Lake processors and 4K screens.

Microsoft is also said to increase RAM and storage options, along with implementing a few design changes that should make the device lighter and slimmer than before.

Past leaks suggest the device will get PC-level ARM-based processors from Intel. And according to recent reports, the hybrid is said to come equipped with the latest Kaby Lake Core i7 processor. Microsoft recently showcased Windows 10 running on an ARM processor, which led to speculations that the upcoming Surface Pro 5 would pack PC-grade processors.

Moreover, with the next Windows 10 Creators Update set for a release in Q1 2017, suggests that Microsoft could unveil the next Surface Pro hybrid alongside the upcoming update.

Being Microsoft’s flagship device, the upcoming Surface Pro 5 is expected to pack top-of-the-line specs and features with all the shenanigans of an high-end device.

DigiTimes earlier reported that Microsoft plans to refresh its Surface Pro range next year with the launch of the Surface Pro 5 in Q1 2017.

There’s no denying that the upcoming Surface Pro 5 will be an expensive device. To put things in perspective, the base model of the Surface Pro 4 with Intel Core M3 processor and 4 GB of memory is currently priced at $899. And with the latest Intel Skylake processor onboard, we can expect the price to increase up to $999.

Besides, sources also suggest the next-gen 2-in-1 Surface Pro tablet would start at $899.  The model with the new Intel Core i7 Kaby Lake processor would be priced around $999, while the top-of-the-line Surface Pro 5 could cost around $1599.