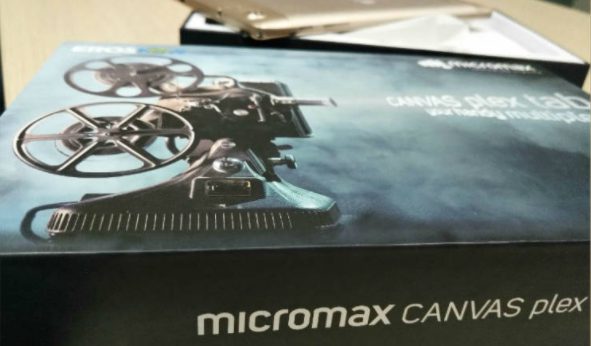 After launching the Canvas Infinity smartphone, Micromax to soon launch a new tablet; the Canvas Plex shortly in India very soon. Today, a leaked image of the tablet was spotted on the website revealing some of the information of the tablet. The tablet spotted in a silver color variant with a box pack which indicates and confirm the name of the device.

The box kit contains a picture of a projector which suggests that it is a multimedia oriented tablet. Moreover, the other leaked image shows the back of the device which includes a probable metal back, two speaker grill, and a single lens camera with a LED Flash. The Canvas tab, DTS, and Eros Now logo can be seen on the back. The right side of the tablet has the power button and the Volume rockers. While the top right of the tablet contains 3.5 mm headphone jack.

It is evident from the leaked image that Micromax Canvas Plex tablet is meant for media junkie audiences and it may come with mid range hardware. It is expected to sports an 8-inches Full HD display, MediaTek/Intel Soc coupled with 3GB RAM, Android 7.1.1 operating system, and 5000mAh Li-ion battery. We hope that the tablet will come with 4G VoLTE support feature, which doesn’t show up in the majority of tablets currently available in Indian market.

The Canvas Plex will be launched in India with an expected price tag of INR 12,000 price bracket which is, however, highly competitive price segment already. As far as, the above mention price segment is concerned, the number of brands is already flooded the segment with numerous low-cost offerings. The leading brands like Lenovo, HP, Dell, and iBall are already ruling the market. But this leaked hinted some promising aspect of tablet and hoped it could hold the right nerve of Indian consumers with its upcoming launch.