Android tablet space has shrunk quite a bit over the years due to the iPad sales picking up and Google unable on delivering a quality OS experience. Looking at this, only a handful of OEMs are still in the Android Tablet game and one of them is Lenovo.

The brand has been making Android tablets at various price points and has been at the forefront of delivering units in this pandemic. We already have reviewed the Lenovo Tab P11 Pro which is their flagship Android tablet in the market and now have the Yoga Tab 11 in for review.

Coming in at a price tag of INR 27,990 as of writing this review, the Yoga Tab 11 promises to offer a lot with a particular focus on content consumption. Should you consider this product as your next work/play Tablet? Let’s find out in our full review.

Before starting with the Lenovo Yoga Tab 11 review, let’s have a look at the phone’s specifications. 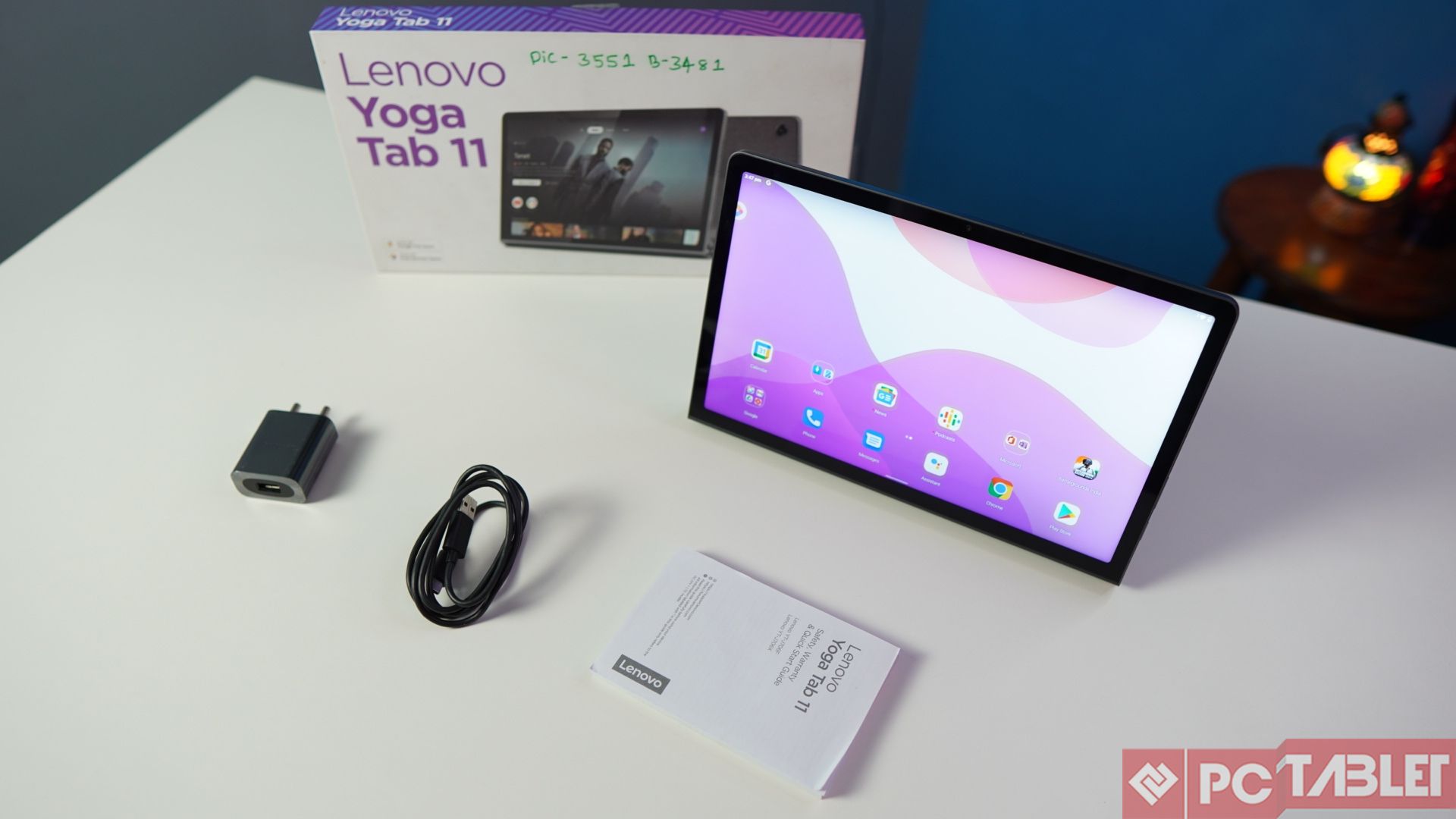 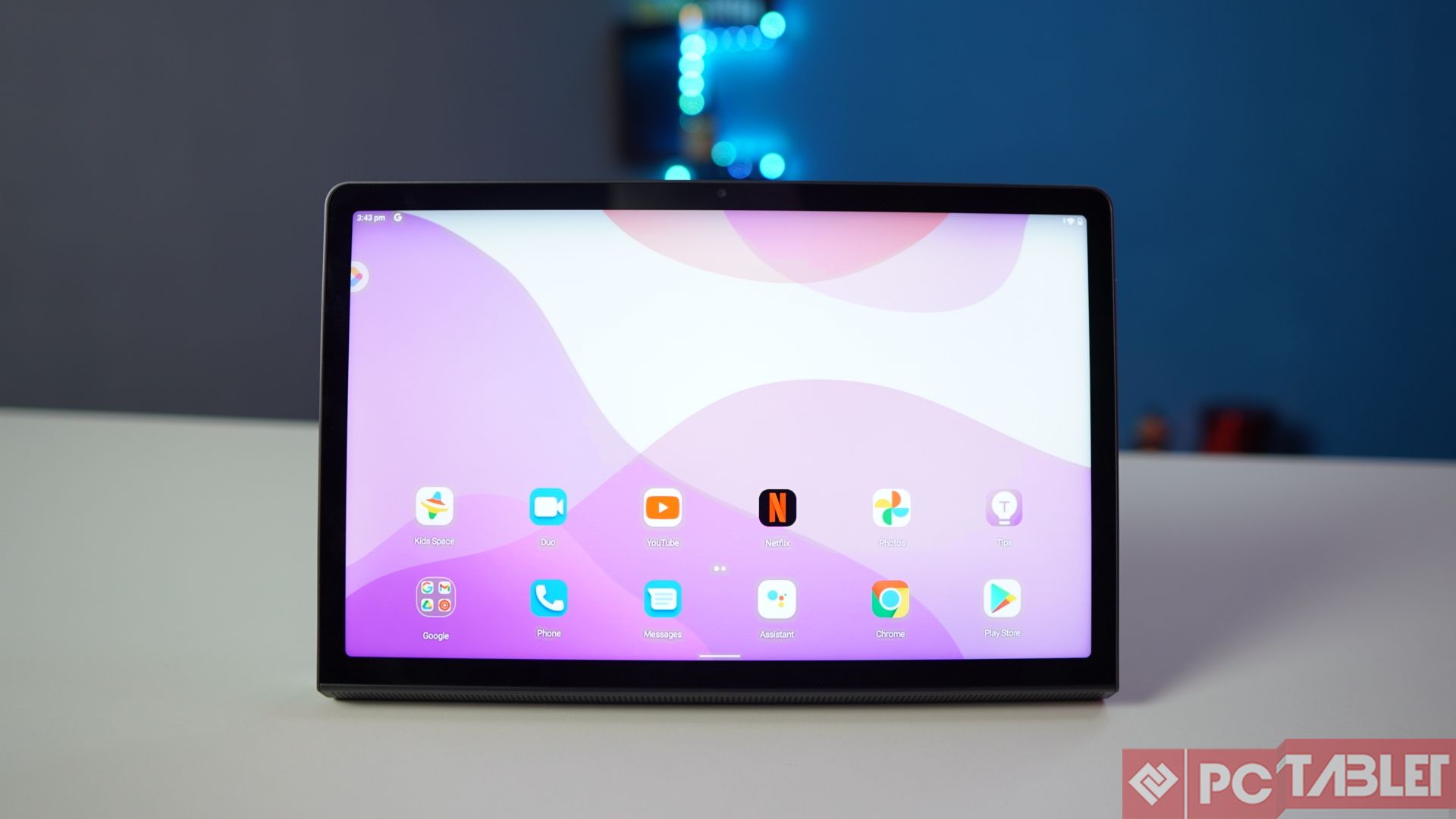 The Lenovo Yoga Tab 11 gets a different design compared to the current thin and light tablet category. It’s got a kickstand build into it that makes the bottom part heavy and thick. The construction on the tablet is done in plastic and metal. The Tab 11 also gets the fabric treatment that is seen in the Lenovo Smart Clock and other Google Assistant ecosystem products.

This dual-tone design element gives the tablet a rich and premium feel. Flipping the tablet reveals the massive 11-inch 2K resolution LCD panel.  The sides of the device are flattened, which is a common design choice on premium tablets. There is a quad-speaker system on the tablet, with two of them placed on the top and two on the bottom along the base of the tablet.

Moving to the display, we get a sizeable 11-inch LCD panel with support for Dolby Vision. This one feature alone keeps Tab 11 in a different category in itself. Though the panel supports Dolby Vision, the lack of HDR or even HDR10+ is a led down. On top of that, the panel isn’t that bright and mostly flat out of the box. It needs colour calibration to get someone good use out this panel. The blacks are deep for an LCD panel, colours post-calibration are punchy.

The thing to note is you get Dolby Vision support on Netflix on specific titles, since not many OTT platforms push out content in Dolby Vision, you are stuck with features delivering only on a single app. 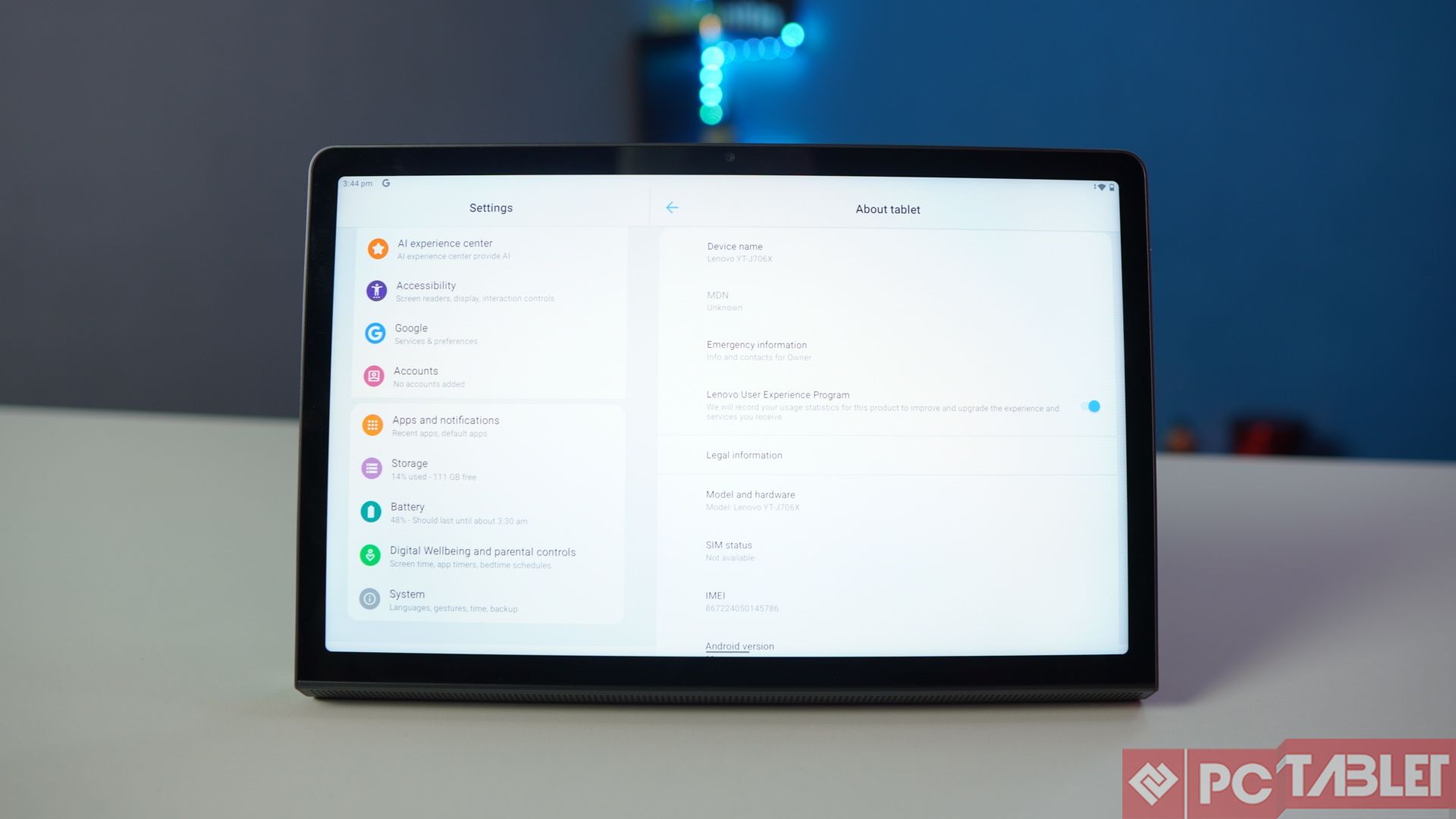 A mostly stock Android 11 build powers the Yoga Tab 11. There are 3rd-party apps bundled in including Netflix, Dolby Vision, Dolby Atmos, Office, OneNote, Bamboo Paper, and Squid. The tablet is Google Kids Space compatible and comes with YouTube Kids and more tailored controls. Apart from this, all the default apps are from Google, which is, to be honest, is a very good thing.

While the UI is mostly stock,  Lenovo did manage to add subtle changes here and there. You get the Lenovo Camera app, Entertainment space and more. The tablet is aimed at both entertainment and productivity and it shows in UI. 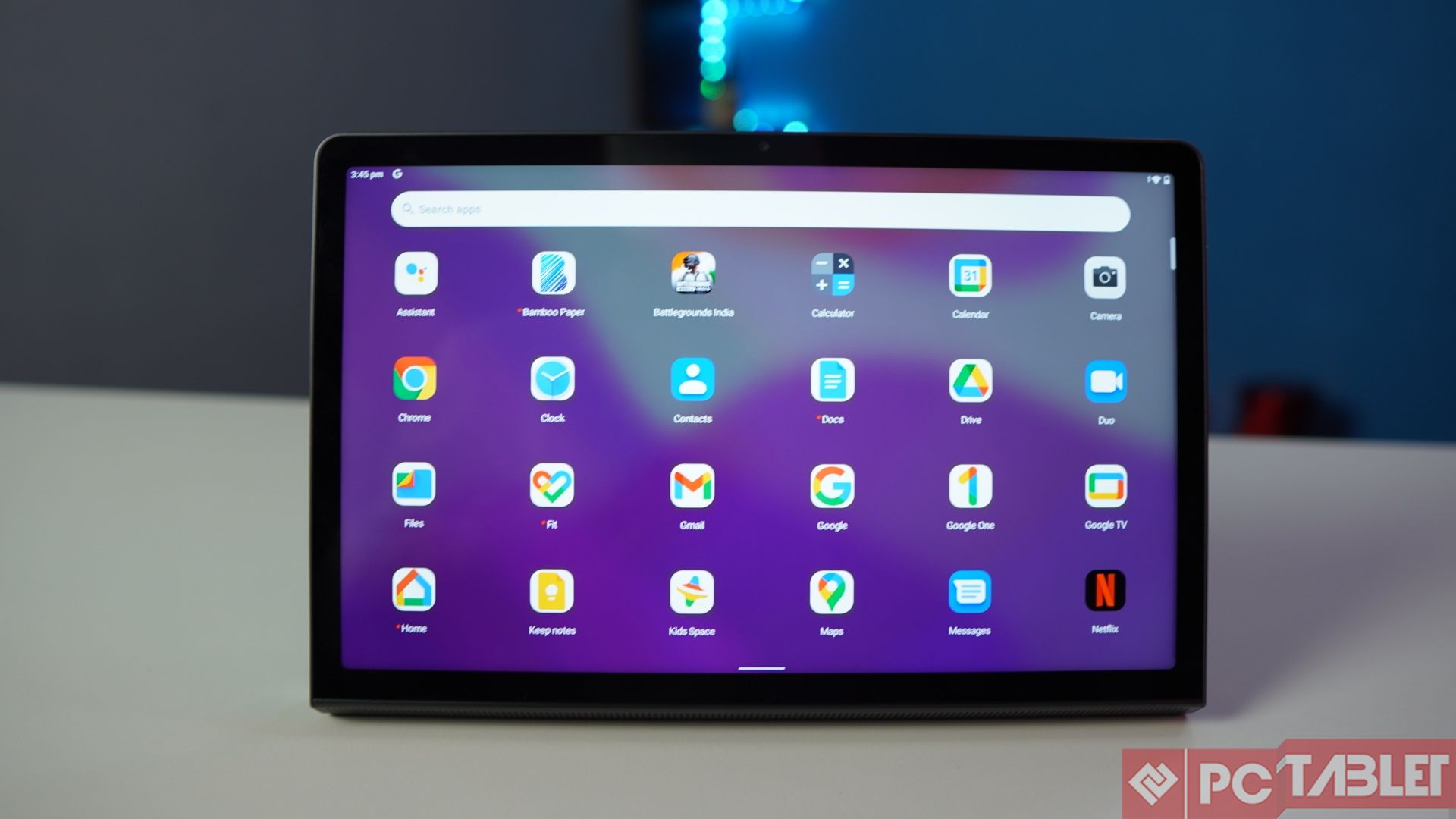 As for the performance, the Tab 11 comes powered by the MediaTek Helios G90T processor. This is a 4G only chip and one that was very famous for powering mid-range smartphones a couple of years back. That being said, for some reason Lenovo has only brought the tablet to India in just a single SKU. You get 4GB of LPDDR4X RAM and 128GB of UFS2.1 storage which can be further expanded up to 256GB via a microSD card. The chipset is capable enough still to push the tablet through most day-to-day tasks with ease.

With the added nano-SIM slot, you can use 4G VoLTE to take calls on this tablet which was not the case on the much pricier Lenovo Tab P11 Pro. Coming to the sound, the quad-speakers present here put out decent sound, which, coupled with the gorgeous display, elevate the viewing experience. 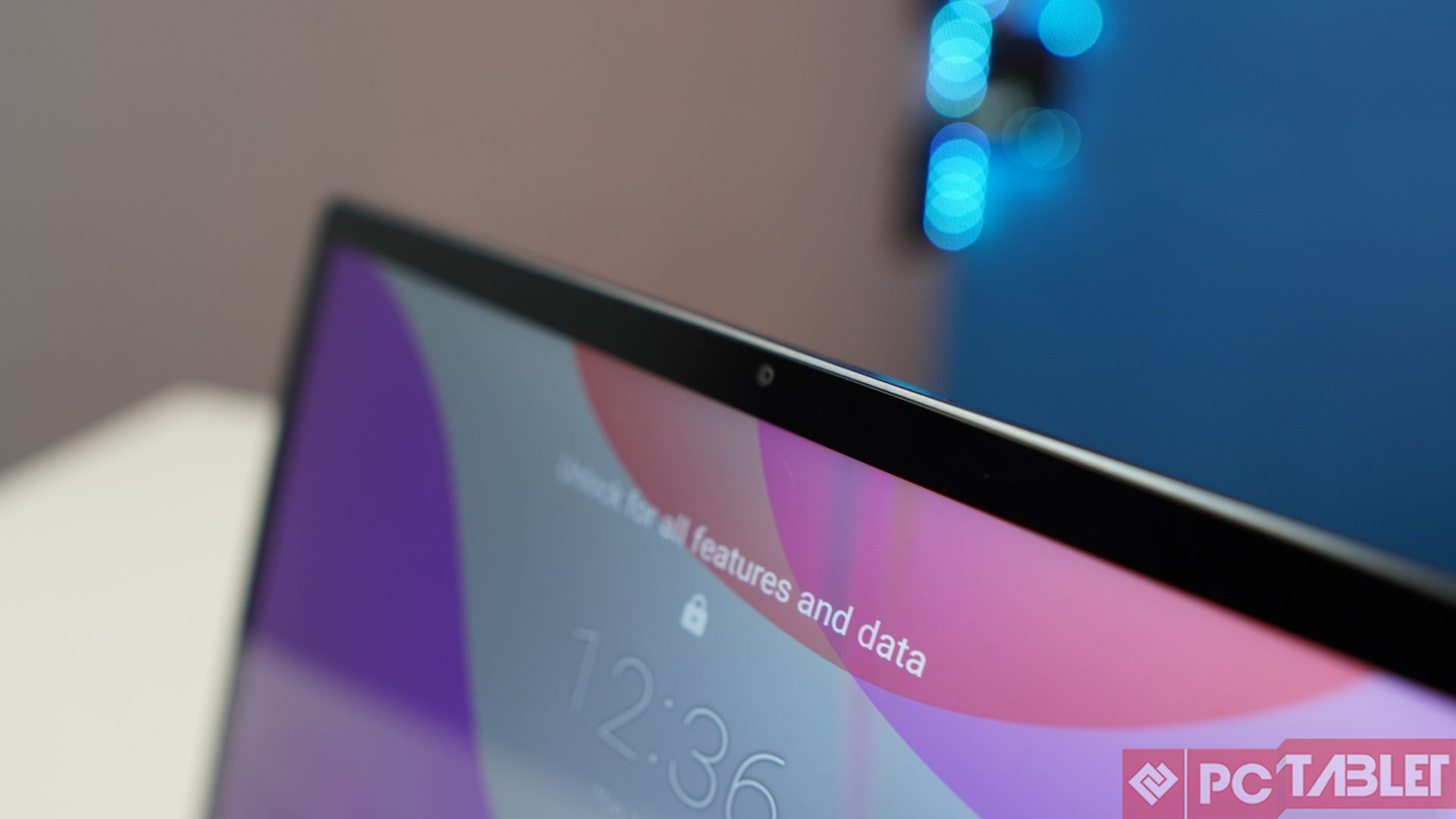 The Lenovo Yoga Tab 11 gets a single 8MP camera on the front and an 8MP snapper on the rear. The bundled camera app features familiar modes and design, especially for users who have used a Lenovo or Motorola product in the past. The output from both the cameras is decent at best and you can easily take calls and meetings from either of the two.

As for the battery, we get a reasonably sized 7,500mAh cell which is more than enough to provide a great experience. During our tests, we could quickly get upwards of 7 Hours of screen-on-time with mixed-use. However, charing this battery takes a task, especially with bundled 20W charger. But again, charge it while sleeping. We totally loved the battery backup given the massive 11″ 2K display it powers.