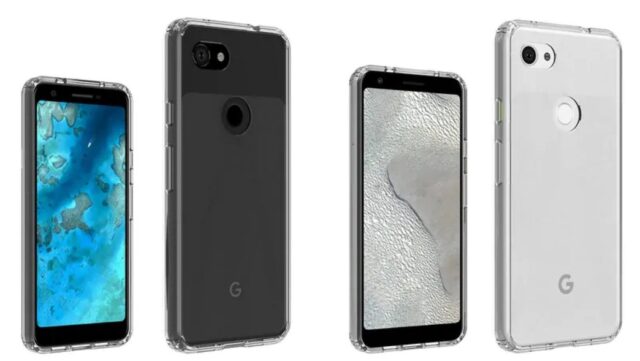 Lately, the upcoming Google Pixel 3a and Pixel 3a XL appeared on Google Play Console, revealing their key specifications. Now, the Pixel 3a duo has leaked again through case renders, giving us an idea about the design of both the handsets.

Have a look at the freshly leaked case renders and you’ll notice that the Pixel 3a, as well as the 3a XL, look more or less similar to the Pixel 3 and 3 XL. The back has a dual tone design, followed by thick bezels on top and bottom of the display. Furthermore, the base frame has a USB type-C port for charging.

However, there are specific noticeable changes such as the presence of a 3.5mm audio jack which has been omitted by Google since last two Pixel generations. Moreover, the images suggest bottom-firing dual speakers at the bottom compared to the double front-firing unit on Pixel 3. As evident, there’s no notch on either of them, and both the handsets seem to follow the standard Pixel 2 XL design schema. Do note that there’s only one selfie shooter given up front, compared to the dual front shooters on the Pixel 3 duo.

As you’d expect, the rear houses a single camera and an LED flash while the fingerprint scanner sits at its usual position. The Pixel 3 had its sim slot at the bottom frame while the one here appears to bear the same on the top edge, next to the 3.5mm audio jack.

There are two simple colour variants shown in the image. One is the Clearly White edition with a cyan coloured power button whereas the other seems to be the Just Black edition with black coloured buttons.

The latter will notably be powered by Qualcomm Snapdragon 670 SoC. Both the handsets will come with 4GB of RAM. While the case renders show the Pixel 3a in black and the 3a XL in white, the rumours also hint at a new Iris colour variant in tow.