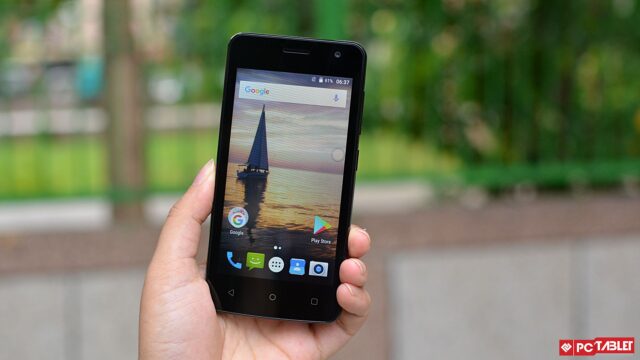 iVOOMi Me4 comes in a small box with all of the accessories; charger, USB cable, earphones, user manual and warranty card. The 2000mAh battery is removable and placed separated in the box, it has to be inserted after unboxing. It is a low budget smartphone with low specifications but it comes with the 4G VoLTE technology which provides crystal clear voice and fast data speeds.

The iVOOMi Me4 comes with a 4.5-inch FWGA (854 X 480) resolution display. It is powered by a 64 bit 1.1 GHz quad core MediaTek processor and is paired with 1GB RAM. It has an 8GB internal memory which is expandable up to 64GB using a microSD card. For selfies and pictures, it comes with a 5MP shooter with flash at the back and 5MP selfie camera.

It runs on the latest Android 7.0 Nougat, it has the stock Android interface without any theme or UI on it. It comes with some apps which can be useful for some people or annoying for others, but you can uninstall them if you want to. It supports 4G VoLTE and comes with a 2000mAh battery for long talk time.

iVOOMi Me4 comes with a plastic body and glossy removable back cover to access the removable battery, SIM card slots, and the microSD card slot. The front panel has the 4.5 inches IPS display and the navigation buttons below it. The micro USB port for charging and data syncing is on the top edge with the 3.5 mm audio port.

The right edge has the power button and the volume rocker button, both of them are shiny with no pattern over them which makes it a bit difficult to know which one is which. The back of the smartphone has the primary camera with LED flash below it, the loudspeaker is also placed at the back which muffles the sound when placed face side up on the couch.

The quad core processor from MediaTek works just fine, you can multitask certain apps (three or four) simultaneously. The browser pages reload while multitasking and you can play low graphics games on this smartphone. Launching apps has some delay but at least you are getting all the features from Android 7.0 Nougat.

All features work just fine and perfect for what you are paying for. The Android 7.0 Nougat comes with most of the useful apps pre installed like news app, UC browser, keyboard and quick touch. Quick Touch app is an assistive touch app which let you do most of the navigation and switching toggles easily and fast.

The rear camera is a 5 MP with LED flash and the app is very old from the Android 2.3 Gingerbread version. There are three modes in the app; panorama, beauty mode and the normal mode. The pictures are good but not as good as you can post them on social media, the videos quality is also good but you can only shoot up to 480p resolution.

The front facing camera also works just fine like the rear camera, there is no flash for the front but beauty mode is there. It improves the selfies a bit so you can make them as your profile picture on social media. There are also some filters which you can use are built right in the camera app and can be accessed with a shortcut on the camera app UI.

The iVOOMi Me4 is a good smartphone if you want to buy an entry level smartphone just to keep your other SIM card live. You are getting the latest Android 7.1 Nougat on this smartphone so you can also do some basic Android things like syncing contacts and browse some website. And because it is a 4G VoLTE supported smartphone you can get crystal clear voice calls over the 4G network.