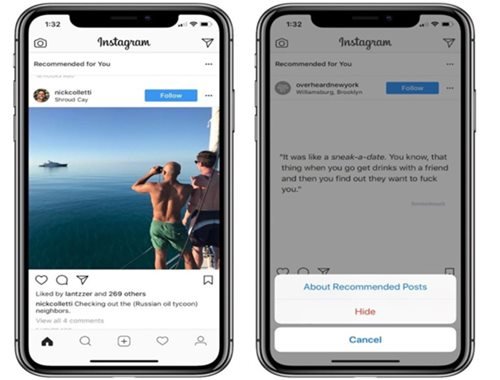 A few days back, Instagram had added support for following hashtags. Now, the social network has introduced another new feature to its users. The new feature comes as ‘Recommended for You.’ The new feature will show recommended posts on the user’s timeline, based on those that have been liked by other accounts that you follow. Well, earlier this month the new feature was under testing, and now Instagram has rolled out this feature for every user.

As per the given statement, when scrolling through Feed, you may see posts that are Recommended to You. These posts are suggested based on posts liked by accounts you are following.

Till now the users had used explore button to see a grid of photos, or by tapping keywords in the search box at the top of the display, or by scrolling through the following tab through the heart icon to watch photos that your friends have recently liked and to know the users they are following. Now, the new feature will relief the users from this tasks and it will let them know automatically.

The users can choose to hide the recommended posts if they don’t like it. To hide this, the users need to tap on the three dots by the post and then tap hide. But this will not permanently remove all recommended posts this is only for a temporary period.

In the year 2016, Instagram shifted from chronological feed to an algorithmic feed. After that, this Recommended for You is one of the biggest change in the Instagram.  It is now believed that this new feature will give much fresh content to its users. On the other hand, the new feature will help advertisers to earn more many by selling their products as many users as possible. It will help to drive other promotional activities through the app.