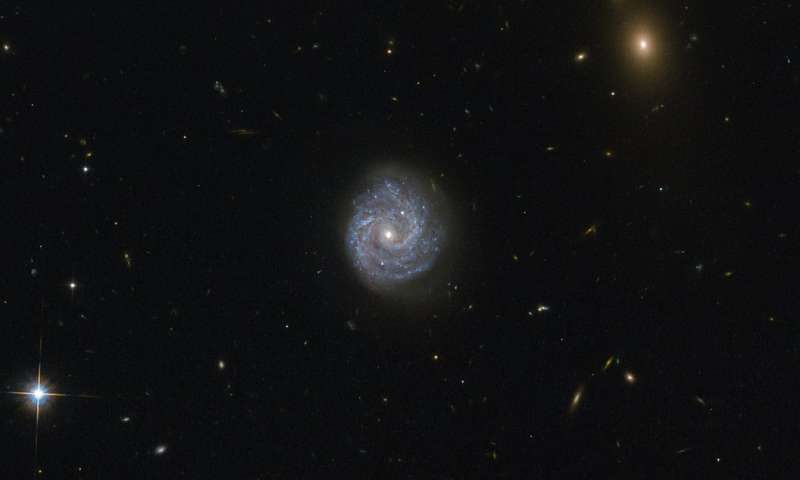 The Hubble Space Telescope has enriched our knowledge of the universe and has delivered many mind blowing pictures of the cosmos. The Hubble Space Telescope was launched in 1990, and it has changed how we see the universe in everyday life. Hubble has sent a breathtaking picture of a spiral galaxy named Rx J1140.1+0307 and is located in the Virgo constellation. However, the picture raises an interesting question.

We know that most galaxies including our Milky Way Galaxy have massive black holes at its centre. The picture of RX J1140.1+0307 looks just like any other typical spiral galaxy, much like the Milky Way Galaxy. However, it nestles at its core one of the lowest black hole masses known in any luminous galactic centre.

The Hubble Space Telescope was launched in 1990 and started taking pictures. However, there was a snag in the primary mirror and the images which were received were blurred. The Hubble Telescope had to undergo a repair which was carried out in 1993 and after that a Wide Field Planetary Camera 2 (WFPC2). The cosmos never looked the same since then as the Hubble started to send one breathtaking image after another.

An interesting experiment was carried out in 1995 when the Hubble Telescope was programmed to look continuously at a seemingly blank patch in the universe. It must be understood that the Hubble can look at a patch of the sky which constitutes only 0.7% of the heavens.  Over a span of 10 days, Hubble took about 342 images of the seemingly empty abyss of the sky.

At the end of 10 days astronomers stitched all the images together and what they found was something stupendous. Every point of light in the picture, every distant blob of light was a galaxy. There were more than 350 galaxies in this minuscule scan of the sky. There could be more than 100,000,000,000 galaxies in this universe!