Home News Huawei P9 vs OnePlus 3: one on one initial specs comparison of... 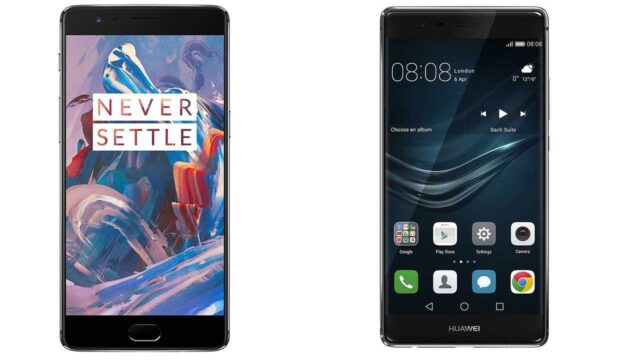 Huawei just launched the high-end Huawei P9 in India. Priced at Rs. 39,999, it intends to compete with some of the premium flagship smartphones in the market. Talking of flagships, we have got their killer, the OnePlus 3 here. Today we will put it against the Huawei P9 and see if it can kill it too. Although the P9 is new to the Indian market, it was released a month earlier than the OnePlus 3. Both the smartphones are very sophisticated and easily qualify to be placed amongst the best Android phones currently in the market.

The Huawei P9 and the OnePlus 3 comes with top notch build quality with outstanding design. Both the handsets are complemented by 2.5 D displays to further enhance their looks. While the P9 keeps it neat with no camera bump whatsoever, the flagship killer’s camera lens slightly protrudes out from its back. The former has a thickness of 7.0 mm which is 0.4 mm less than the 7.4 mm thickness of the latter.

Winner: Huawei P9. Although OnePlus 3 is undoubtedly a great looking device, the P9 slightly edges past it.

Huawei has added a 5.2-inch IPS NEO LCD display to its P9. On the other hand, the OnePlus 3 ropes in a slightly larger 5.5-inch Optic AMOLED display. Both the screens support multitouch and sports Full HD 1080p resolution. Gorilla Glass 4 protects both the displays.

Winner: OnePlus 3. Even though the IPS NEO LCD panel of the Huawei P9 has outstanding picture quality because of higher PPI, the Optic AMOLED display of the OnePlus beats it with deeper black levels and touch responsiveness.

The Huawei P9 is powered by the in-house HiSilicon Kirin 955 SoC. The octa-core 64-bit processor comes with four performance oriented ARM Cortex A72 cores clocked at 2.5 GHz each along with four power saving ARM Cortex A53 cores running at 1.8 GHz each. A quad-core ARM Mali T880 GPU renders the graphics.

The OnePlus 3 comes with the quad-core Qualcomm Snapdragon 820 chipset. The 64-bit chip comes with four Kyro cores, two of which are clocked at 2.15 GHz each while the other two runs at 1.6 GHz each. The graphics performance is handled by the mighty Adreno 530.

Winner: OnePlus 3. The Snapdragon 820 of it is arguably more powerful than the Kirin 955. The former’s Adreno 530 GPU simply squashes the Mali T880 MP4 of the latter. In terms of RAM and Storage, the Huawei P9 has two different variants. The base model sports 3 GB of RAM and comes with 32 GB of internal storage. The higher end version is equipped with 4 GB of RAM along with 64 GB of inbuilt memory. Additionally, it can support microSD cards up to 256 GB, but at the cost of the second SIM slot.

OnePlus, on the other hand, sells only a single variant of the OnePlus 3 which comes with 6 GB of RAM combined with 64 GB of internal memory. It does not support microSD cards.

Both the handsets run the latest Android 6.0 Marshmallow with promises for future updates. The Huawei P9 runs on the Emotion UI 4.1 layered on top of Marshmallow. Oxygen OS 3.2.4 is OnePlus’s customization of the Android 6.0.1. The latter is currently one of the snappiest UI based on Android Operating System.

Winner: OnePlus 3. It is more responsive and agile than its competitor and also known to get updates more consistently.

The Huawei P9 comes with a dual camera set-up with two 12 MP camera lenses placed side by side at the back of the device. One of the camera lens is a normal 12 MP lens capable of detecting RGB light spectrum or can shoot color images. The other is a monochrome lens which can only take black and white pictures.The camera algorithm is co-developed by Leica and boasts DSLR like picture quality.

Even in poor lighting, the P9 take out impressive shots and with night mode you can actually add some dramatic effect to it. App features and modes are really impressive and fun to use, especially when shooting portraits.

The OnePlus 3 comes with a conventional single camera set-up with a 16 MP rear camera unit. The camera module is based on the Sony IMX298 sensor which is presently considered as the benchmark in the smartphone or tablet camera segment.

Both can shoot 1080p videos at up to 60 fps while the OnePlus can additionally shoot 4K videos at 30 fps, but Huawei P9 is so rich in features that you won’t even miss 4K video recording. An 8 MP front camera is present in each of the mobiles, but Huawei’s selfie camera is superior to that of its competitor.

Winner: Huawei P9. Huawei P9’s camera is undoubtedly among the best smartphone camera we have seen in 2016 flagship smartphones.

Identical connectivity options are present in two of the devices. The Huawei P9 and the OnePlus 3 are both dual SIM handsets with 4G LTE support along with VoLTE. They both feature dual band WiFi, Bluetooth 4.2 and USB-C port.

Huawei P9 additionally comes with virtual triple antenna, which is basically an unique antenna arrangement to negate out the interference caused by holding the phone physically with your hand. The network reception quality is exceptional on P9.

Winner: Huawei P9 (Huawei is one of the leading Network device manufacturers in the world).

Each of the smartphones sports the same battery capacity of 3000mAh. Both are non-removable Lithium-ion batteries with support for fast charging. The OnePlus 3 has a proprietary fast charging mechanism called Dash Charging which replenishes more than 60% of battery in just 30 minutes. The charging technology is said to carry more current than other fast charging solutions. The Dash Charge carries more current while keeping the voltage down to 5 volts which leads to stable and consistent charging needs.

In the same duration, the Huawei P9 gets charged 44 percent.

Winner: OnePlus 3. It costs a whopping Rs. 12,000 less in spite of providing more RAM and Storage. But if your pocket allows you to go towards higher segment of the market, Huawei P9 is something to consider over OnePlus 3.

This is just an initial specs comparison based on the first impressions of both the devices. We’ll soon be coming with the detailed review and in-depth comparison of the same.

Overall, the OnePlus 3 flagship killer has an edge if we consider the overall package offering mainly because of the price. Only if you have extra budget, you may go for the Huawei P9 due to its capability to shoot better still images and better Network reception.