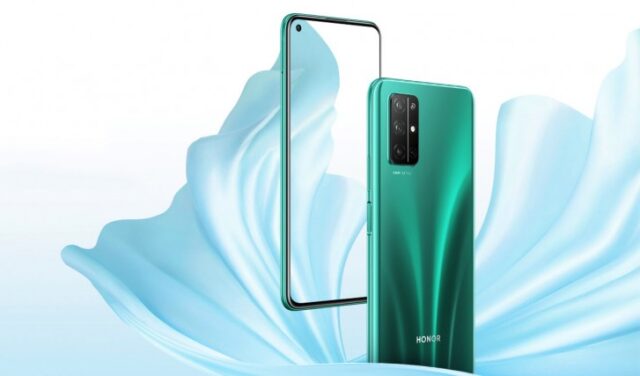 Huawei’s sub-brand Honor has now launched a new phone in its 30-series, dubbed as Honor 30S in China. The upper mid-range device flaunts a premium glass design and comes equipped with the brand-new Kirin 820 5G chipset. Let’s have a brief look at its specs, features, and price.

The Honor 30S comes with a 6.5-inch IPS display having a Full-HD+ resolution of 1080 x 2400 pixels. Furthermore, the panel touts a punch-hole cutout at the top-left corner. Just like the Redmi Note 9 Pro, the phone gets a side-mounted capacitive fingerprint scanner.

Under the hood, it gets powered by the HiSilicon Kirin 820 SoC built on the 7nm process. The chipset comes with a built-in 5G modem that allows for dual-mode 5G,  supporting both SA and NSA networks. It comes bundled with 8GB RAM and 128 or 256GB storage (expandable) configurations.

Coming to the optics department, the Honor 30S features a total of four cameras at the rear. The setup comprises a 64MP primary camera with f/1.8 aperture and an 8MP telephoto shooter with 3x optical and up to 20x hybrid zoom. There’s also an 8MP ultrawide camera onboard, accompanied by a 2MP depth helper. For selfies, there’s a 16MP camera housed in punch-hole upfront.

On the software terms, the phone runs MagicUI 3.1 on top of Android 10. Just like other recent Huawei and Honor phones, it comes without Google apps or services. All of this is backed by a 4,000mAh battery that supports 40W supercharging, aking to the Huawei P40 Pro.

The handset will be available in Night Black, White, Green, and Red colour options with gradient finishes. Pre-orders start today, whereas the sale will begin April 7 for online markets and April 10 for offline chains.

As of now, there’s no official announcement regarding the availability in other markets including India.