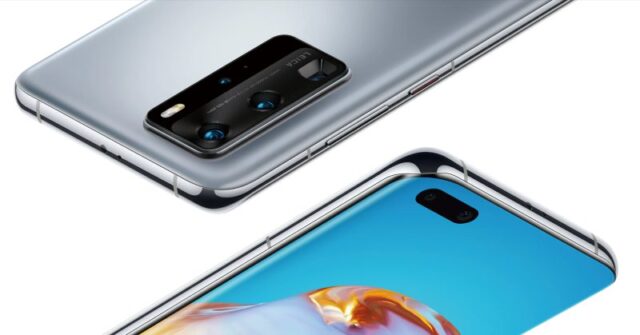 As scheduled, Huawei today unveiled its new flagship Huawei P40 Pro and P40 smartphones in an online-only event. The phones flaunt further improvements in the camera department and feature a fresh design with punch-hole cameras. Let’s have a brief look at the specifications and features of the duo.

The Huawei P40 Pro comes with a 6.58-inch OLED display with 2640 x 1200 pixels resolution and 90Hz refresh rate. The panel also supports DCI-P3 HDR colour gamut and gets an in-display fingerprint scanner which is 30% larger than before. It is being marketed as Overflow display with all four edges curved to the frame.

Powering the phone at its core is the HiSilicon Kirin 990 5G which comes equipped with an integrated 5G modem and is built on the 7nm+ EUV process. The Pro also touts a 4-layer SuperCool system comprising graphene film and vapour chamber. It is available with 8GB of RAM and 256GB of storage.

The device runs EMUI 10.1 based on Android 10 which as expected gets Huawei Mobile Services and AppGallery instead of Google Services and Play Store. Furthermore, it also gets a new smart assistant named Celia, and a voice and video call app with screen-sharing called MeetTime.

As for optics, the P40 Pro gets a total of four Leica-branded cameras at the rear. It includes a Leica-powered 50MP primary camera with f/1.9 aperture, and 1/2.8″ sensor size which is even larger than 1.33″ unit on the Galaxy S20 Ultra and allows 200% more light intake than iPhone 11 Pro Max, as claimed by the company. Huawei has also highlighted the presence of Octa Phase Detection Auto Focus (100% of pixels support PDAF) and Optical Image Stabilization.

Other sensors onboard include a 40MP ultrawide angle CineLens camera with f/1.8 aperture and a 5x optical 12MP telephoto camera with OIS. There’s also a 3D Time of Flight camera and a colour temperature sensor in the module. The phone is capable of shooting 4K videos at 60fps and 7680fps slow-motion videos.

For selfies, there’s a 32MP primary camera with auto-focus and f/2.2 aperture. And then there’s an IR sensor and depth camera, followed by ambient and proximity sensors housed in the large punch-hole on the top left. The Face Unlock on the phone uses the IR camera and can work in any lighting conditions.

The cheaper Huawei P40, on the other hand, gets a smaller 6.1-inch OLED display with a Full-HD+ resolution of 2340 x 1080 pixels. Unlike the Pro, it’s a standard 60Hz panel with no fancy curves at the edges. There’s also no Infrared sensor on the device. Though, it retains the in-display fingerprint scanner.

The device gets powered by Kirin 990 5G chipset. Note that it doesn’t get the SuperCool system present on the Pro, and is available with 8GB of RAM and 128GB of storage.

The phone gets a total of three cameras at the back, alongside a colour temperature sensor. The primary camera is the same 50MP sensor with f/1.9 aperture and 1/2.8″ size from the Pro model. It is followed by a 16MP ultrawide camera with f/2.2 lens aperture and an 8MP 3x optical telephoto camera with OIS, similar to the ones on Mate 30. There’s a 32MP selfie camera, but it lacks the auto-focus feature.

The phone gets a smaller 3,800mAh cell with 22.5W wired charging; no wireless charging here. Other features include EMUI 10.1, dual sim support with nano memory 2 card and e-sim availability based on region. Compared to IP68 on Huawei P40 Pro, the regular Pro gets basic IP53 resistance against dust and water.

The company has also unveiled a premium variant, dubbed as Huawei P40 Pro Plus.  It comes in Ceramic finish options and swaps the 5X optical lens for two seperate lenses for zoom. This includes an 8MP SuperZoom lens with 10X Optical Zoom and 8MP Telephoto Camera with 3X Optical Zoom which allow for up to 100x scaled zoom. Other specifications are more or less similar to the P40 Pro.

The device will retail for a much higher price tag of 1399 Euros (about INR 1,15,000) for 8GB RAM and 512GB internal storage and will go on sale from June 2020. Note that there won’t be any 4G-only models for either of the devices, as said by the company.