The new GST regulation, implemented by the Indian Government has massively contracted the Indian smartphone industry and the second quarter of 2017 has witnessed the highest decline of smartphone selling in India, claimed a new analysis report, published by Canalys. Even though initially it was thought that implementation won’t affect much, but the latest market report, made by Canalys has argued that it is for the very first time in the history of India that the Indian smartphone industry has massively contracted due to the Indian Government’s new tax system – GST.

While Samsung with a 25% share is heading the chart, Xiaomi with 4.8 million shipments, Vivo with its all-time highest – 3.4 million unit shipments, are following the South Korean Multinational. Similarly, Oppo and Lenovo, with the purchase of nearly 1.9 million smartphones in Q2 2017, have grabbed fourth and fifth positions respectively. 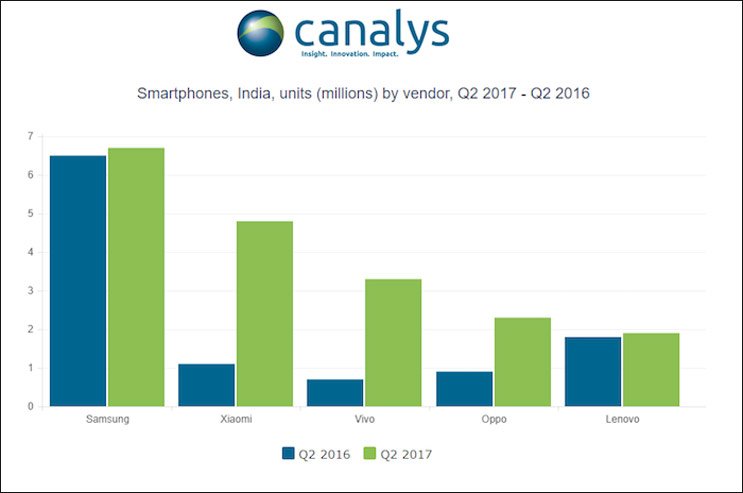 According to the new chart, published by Canalys, Samsung, in contrast to the same quarter of 2016, has witnessed some prominent hike while the growth report of Chinese Player Xiaomi and Vivo in comparison to their last year’s Q2 report is quite notable. But on an overall basis, the Indian smartphone industry’s shipment report for Q2 of the current year is quite disappointing as the shipments have dropped by 4% year-on-year to just lower than 27 million units in Q2.

And as per the market research firm Canalys, the introduction of the Goods and Services Tax (GST) has been “adversely” affecting the domestic growth of the smartphone market.